A few months back, a story went around the Internet about a bizarre computer issue from the mid 2000s. It was from a blog post by Microsoft developer Raymond Chen, who explains: “a laptop manufacturer came to the Windows team, and reported a serious problem. It turns out when they played a song by one specific artist, and in fact it was one specific song, the laptop crashed.” The song? Janet Jackson’s smash hit Rhythm Nation.

Today, solid state drives are increasingly the norm, but for decades the main hard drives found in computers involved a spinning platter with the data, and an arm over it that reads and writes the data — like a really tiny little record player inside of a box. And it’s spinning fast enough to actually hit a musical note. The pitch it makes depends on the speed of the hard drive, and that pitch is the hard drive’s resonant frequency. So if you played that exact same pitch loud enough, it would physically break the hard drive. When the laptop manufacturer was trying to pinpoint the problem, they figured out that Rhythm Nation had a frequency in it that was breaking these hard drives that way. And they even narrowed it down to one particular model of hard drive that was used in a bunch of different companies’ laptops.

There are a few reasons why other songs don’t break hard drives the way this one does — and why only Janet Jackson’s song has this particular frequency. The song is sped up very slightly to make it a little more exciting. And since it was is recorded in the era of tape machines, when you speed the tape up, it also goes up in pitch. So the notes in Rhythm Nation fall between the ones you’d normally hear in a pop hit.

Our engineer Martín was curious about which frequency caused this problem. Most of the theories on the internet suggested that it was a bass note in the song. But when he examined the song in spectral analysis software, he noticed one prominent 2000hz synthesizer note that lines up with a different hard drive resonant frequency. 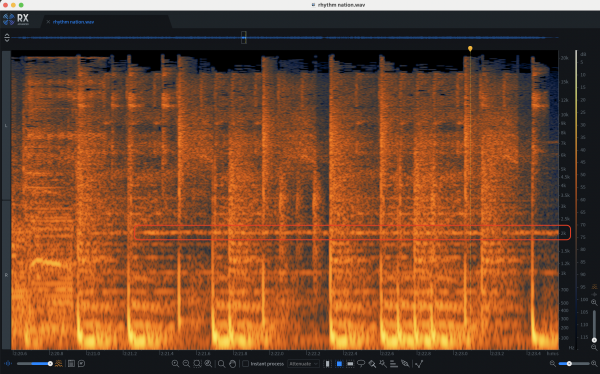 In his blog post, Raymond Chen wrote that there actually was a fairly simple solution on these motherboards. They just programmed a really steep EQ cut right at those exact frequencies. Still, it’s entirely possible that there are laptops still out there that never got fixed or updated, just waiting to break if someone puts on Rhythm Nation.