That Jazzy Cup by Christopher Johnson 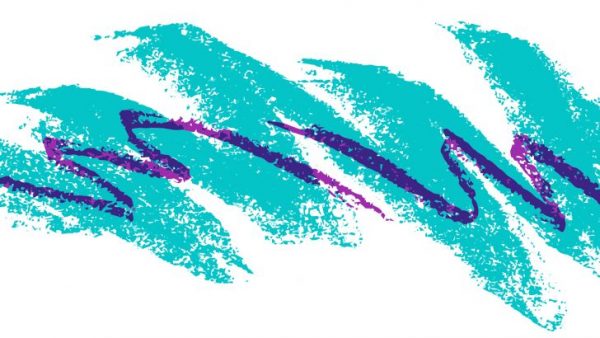 Back in the late 1980s, designs tended to be bright and wild. The Jazz cup was no exception. And somehow, the Jazz design didn’t disappear at the end of the 80s like so many other fad designs did. But for years, no one was able to figure out who designed it. Finally, in 2015, a reporter at the Springfield News-Leader in Missouri tracked down the woman believed to be the creator of this iconic piece of disposable tableware art. Her name is Gina Ekiss (GUY-nah E-kiss) and she lives in Aurora, Missouri. 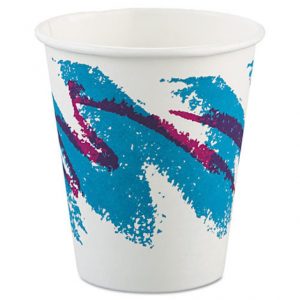 In the late 80s, Ekiss graduated from college with an art degree and she landed her first job at Sweetheart Cup Company in Springfield, Missouri. And she became what was called a general line artist — someone who designs the art for their disposable cups, bowls and plates.

Soon after Gina joined Sweetheart, the company decided it was time to update some of its tableware art. They

wanted something new to kick off the 1990s. The design had to be something fairly clean, easily reprinted, and able to work on curved surfaces like cups, plates and bowls. So they held an internal competition, and Ekiss won with her splashy jazz design, which stood out for both its flashy graphic quality and its bold bright colors. She says the official colors for the final design were, according to the Pantone Matching System, “326 Teal” and “253 Purple”.

For her part, Ekiss got a gift certificate, some swag, and of course bragging rights, because she did the work for Sweetheart and they owned the copyright for the design.

But to this day, she sees her work everywhere, perhaps in part because it grew up with the internet and has been so widely seen and shared online by nostalgic Millennials.

And for its part, the internet helped crack the case, leading the first reporter to find Ekiss and help tell her story. There was just one catch.

Another designer, Stephanie Miller, claims to be the original designer of the jazz pattern. When the story came out about Ekiss, Miller took to social media to defend her claim to its creation. Like Ekiss, Miller studied design in college. After graduation, she landed a graphic design job at Imperial Cup in Ohio. She says that in the late 1980s, Imperial asked her to help update its look. One of her designs – the one Imperial would print on its tableware – feature two paint brushed zigzags, similar to Jazz.

Miller contends that Sweetheart saw her Imperial cup art, had Ekiss copy it, then claimed it as their own and sent Imperial a cease and desist letter. The thing is: Miller hasn’t been able to provide any proof of her claims as yet. Sweetheart, for its part, continues to credit Ekiss. Meanwhile, she remains pleased to see the success of the Jazz pattern out in the world.