Sometimes, moving a building (like a lighthouse) is about preserving historic architecture or cultural heritage. But for one significant structure in Guadalajara, Mexico, the stakes were considerably higher.

Back in 1950, city officials decided to widen a major avenue and a lot of buildings were just demolished to make way. But weighing in at around 1700 tons, the Mexican Telephone and Telegraph Company was critical to the area’s communications infrastructure — knocking it down would have disrupted local telephone service for at least a week. 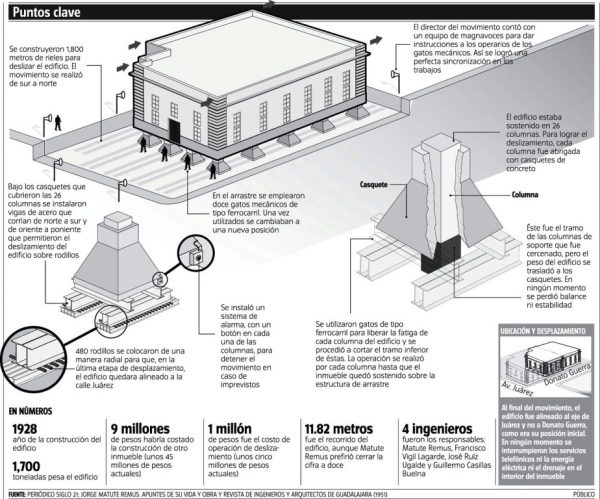 Jorge Matute Remus, dean of the city’s university and a civil engineer, came forward with a solution. He suggested the entire building be lifted and moved, all while leaving the communications lines wired up and keeping the operators at work inside of the structure.

Naturally, some of the workers were nervous about this idea. Matute Remus was sympathetic to their concerns, and wanted to reassure these operators and make them feel safe. So his wife Esmeralda agreed to also go into the building while it was being moved. She even took along their seven-year-old son, Juan Jorge.

As she recalls in the video above, they couldn’t even feel the motion of the building as it was slowly shifted about 40 feet to its new location. The whole move was done in just five days, with no interruption to phone service, and deemed a big success for the city. It was all accomplished on a budget of around $100,000, a fraction of what it would have cost to demolish the structure and build a replacement.

Today, nearly 70 years later, the building is still standing, and a sculpture of Matute Remus stands outside one entrance — this life-sized figure of him appears to be pushing the building. Next to it, a plaque on the facade recalls his civil service and engineering genius.

Special thanks to Tamara Solorzano who wrote in from Guadalajara to share this story of a hometown hero’s clever building move.