The color spectrum can seem immutable — a fixed physical reality that is self-evident and unchanging. But the names we give colors in one language don’t always translate into others. And some linguists argue that our experience of reality itself is shaped by language, including: which colors get named and which names get most regularly used. How might an Italian see “cyan” (a greenish-blue), for instance, as compared to a French person to whom it’s just another shade of “blue?” Or in less philosophical and more concrete terms: how did Japanese stoplights end up being a kind of in-between “bleen?”

“Historically, there has been significant overlap in the Japanese language as it pertains to green (midori) and blue (ao),” explains author Allan Richarz. “Blue—one of the four traditional colors originally established in the Japanese language along with red, black and white—historically encompassed items that other cultures would describe as green,” resulting in a kind of “grue” or “bleen.” Objects (e.g. apples) or persons (e.g. novices) that would be “green” in English are referred to in Japanese as being “blue” instead — and this includes traffic lights. 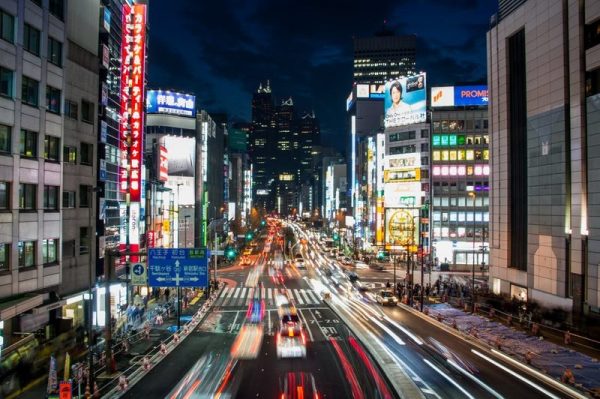 In most of the world, red means stop, orange means caution and green means go. But Japan is notably not a signatory of the Vienna Convention on Road Signs and Signals standardizing such things. Instead, Japanese stoplights (whether greenish blue or bluish green) have been called “blue” in official documents for nearly 100 years. Color vision tests for drivers even use red, yellow and blue. Over time, linguists and urbanists raised questions: should lights be made blue as their description suggests, or should they be accurately called green?

“Ultimately,” writes Richarz, “a novel solution was employed. In 1973, the government mandated through a cabinet order that traffic lights use the bluest shade of green possible—still technically green, but noticeably blue enough to justifiably continue using the ao [(blue)] nomenclature. While modern Japanese allows for a clear delineation between blue and green, the concept of blue still encompassing shades of green still remains firmly rooted in Japanese culture and language.”

And Japan is not alone, either generally (in terms of dividing up colors differently) or specifically (with regards to the historical conflation of green and blue). The role of “grue” in particular is a commonly studied phenomenon by linguists across various languages.

Even beyond bleen and grue, though, where humans draw the line on a wheel of hues is ultimately a subjective choice, not an objective given. This is easy to see, for instance, with examples of lighter and darker shades of a color. To put it in perspective for English speakers: Russian has two different words for “light blue” and “dark blue,” while in English “light red” is “pink.” Whether or not these distinctions fundamentally shape our experience of reality will no doubt continue to be debated by philosophers and linguists for many years to come.

99% Invisible
Origin of the Spectrum: A Naturalist’s…