Paul Revere Williams was a prolific architect capable of designing compelling buildings across a wide spectrum of styles; but while much of his legacy remains in the built environment of Los Angeles, it was long believed most of his illustrations and blueprints were lost in a fire decades ago. As it turns out, tens of thousands of these drawings as well as photographs and correspondences survived after all. 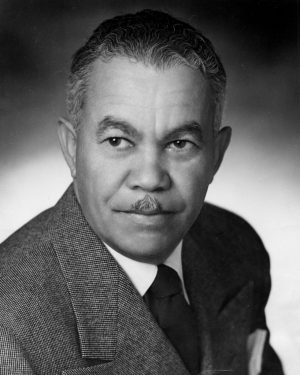 According to the Los Angeles Times, “the Getty Research Institute (GRI) and USC’s School of Architecture are expected to announce a joint acquisition from Williams’ granddaughter Karen Elyse Hudson, who has long served as the principal steward of Williams’ work.” In total, the collection contains nearly 50,000 drawings, plans and blueprints.

Paul Williams was an architect to the stars, designing stunning homes for famous figures during the Golden Age of Hollywood. In a field with a long history of lacking diversity, he was a pioneer who set a number of records, including: first African-American architect in California.

Some of Williams’ most well-known works were palatial residences, but he also designed all kinds of other buildings, including schools, hotels and banks. In fact, the bank long believed to hold so much of his lost work was one of his redesign projects. It burned down in 1992 as the city of Los Angeles erupted into unrest following the acquittal of a group of police officers on trial for brutally beating Rodney King.

In the decades since the fire, the Paul Williams Project has sought to track down lost works of the architect, connecting buildings to their designer. Part of the challenge came from Williams’ own versatility — his ability to design across different styles so effectively — but the task was also made more difficult by the loss of business records in the fire. Hopefully, some of the collected documentation that remains will help identify further buildings Williams worked on over his career.

“The circumstance around which we find ourselves now give us additional impetus to reflect on the lack of diversity in our discipline,” Milton Curry told the Los Angeles Times in a recent interview. Curry is the dean of the University of Southern California School of Architecture, where, he explains, “We have been pushing the notion that architecture has to be more inclusive.” He sees this collection as an opportunity — “The acquisition of Paul Williams’ archives is the moment to double down on creating diversity in our school.” To learn more about the life and work of Paul Williams, take a listen to The Architect of Hollywood: