The fire pole as an object is an iconic symbol of the firefighting profession, but the actual use of the pole has kind of become a thing of the past. If you learned about firefighters as a kid, from your parents or teachers or even a storybook, you were probably told about the pole, because at one time it was in nearly every fire station. And once upon a time, it really did help firefighters get to active fires faster.

Most firehouses of the 1800s were three stories high. Fire horses were stabled on the first floor, with sleeping and eating quarters on the second floor, and hay storage on the third. It worked pretty well, except the horses would often follow the smell of food and try to climb up the stairs. Horses can make it up a set of stairs just fine, but when it comes to going down stairs, they would sometimes get stuck. Replacing more generous stairwells with tight spiral staircases helped alleviate this problem, but also slowed down firefighters trying to get down. One day, a Chicago firefighter grabbed a pole used to load hay into the loft, and slid down that way instead, beating his colleagues to the horses. 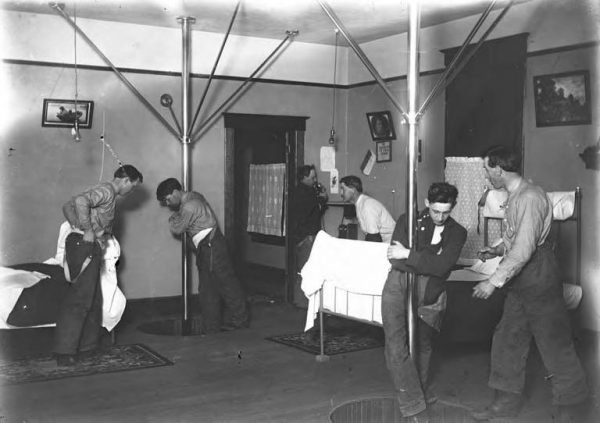 So the firehouse in question, Engine 21, installed a permanent pole. At first, they were the butt of jokes from other firefighters. Eventually, though, these poles spread around the world. But of course, they have issues of their own: people can stumble and fall down the holes, or get going too fast and injure themselves when they land. These days, with trucks instead of horses, and ever more single-story stations, the need for such poles has diminished. Sometimes, one is still included in a new station design, but generally not so much as a functional object but rather a long-standing symbol of the profession.