Rioters carried many familiar flags during the January 6th insurrection at the United States Capitol — Confederate, MAGA, as well as some custom-made ones like a flag of Trump looking like Rambo. Except for onlookers who were already familiar with the design, it would have been easy to overlook one particular bright yellow flag with three red horizontal stripes across the center. This was the flag of South Vietnam.

There were actually several confounding international flags present at the Capitol riot that day: the Canadian, Indian, South Korean flags, all were spotted somewhere in the mayhem. But what was peculiar about the Vietnamese flag being there was that it’s not technically the flag of Vietnam but the Republic of Vietnam, a country that no longer exists. And what this flag stands for (or should stand for) remains a really contentious issue for the Vietnamese American community.

The Republic of Vietnam, or more commonly known as South Vietnam, was formed in part as a reaction to colonialism. Because the country has spent over a thousand years being ruled by outside forces. Vietnam spent much of its early history ruled by China, and then in the mid-1800s, Vietnam came under the control of France. For decades France exploited Vietnam’s natural resources and suppressed Vietnamese identity, going so far as to ban the word “Vietnam” from the region because it was associated with self-determination.

Within Vietnam, there were those who were against colonialism but still wanted to stay closely aligned with the United States. But there were leaders like Ho Chi Minh in the North, who believed that there would never be a path toward prosperity under any form of imperialism. Rather, Vietnam needed to be a completely independent, communist state. Ho Chi Minh and his army, the Viet Minh defeated the French in 1954 which rattled the Western world. Countries like the US were concerned that communism would continue spreading throughout Southeast Asia.

During the 1954 Geneva conference, it was decided that France would withdraw from Northern Vietnam. It was also decided that until free elections could be held, the country would be split in two. So Vietnam was partitioned at the 17th parallel, with a communist country in the north. The south, meanwhile, is nominally democratic, albeit with a lot of US influence. Each side had separate ideologies, territories, and flags. 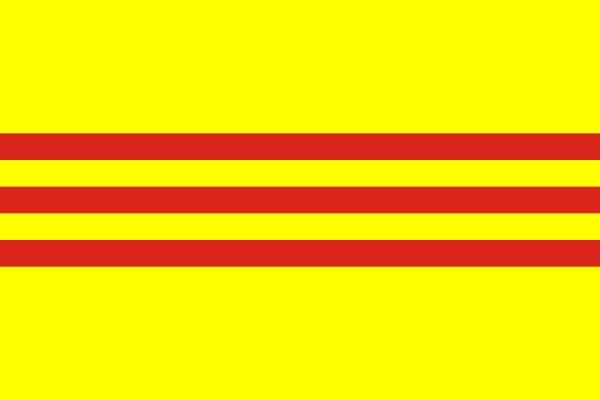 The flag of South Vietnam was a yellow field with three thin red stripes running horizontally across the center. The yellow symbolized the people and the three stripes represent the three distinct regions of the country: North, Central, and South Vietnam unified under one banner. In the North, leadership wanted the same thing: a unified Vietnam under those same two colors. But theirs was a different flag. A red field with a bright yellow star at the center — the five points of the star were to represent peasants, workers, intellectuals, traders, and soldiers, united in their effort to build a socialist future. 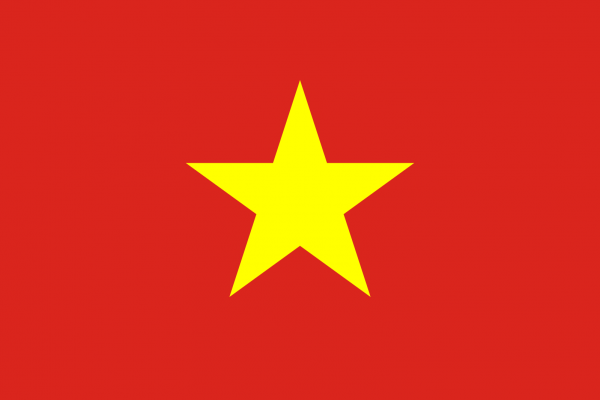 These two Vietnams clashed in a civil war that lasted for two decades. The US wanted South Vietnam to be its anti-communist stronghold in Southeast Asia, but as the war dragged on, it became clearer and clearer that a democratic Vietnam was not possible. Ultimately, the North prevailed. After the fall of Saigon, the north and south once again became one nation. The new government of the Socialist Republic of Vietnam immediately went to task undoing years of capitalist influence on the southern half of the country with grim efficiency.

Many Vietnamese fled the south entirely, and when the first wave of southern Vietnamese refugees resettled in other parts of the world in the late 70s and early 80s, their music, history, culture, and other symbols, like the flag, became the responsibility of this diaspora. For that generation, the flag became a banner, a memorial, and a link connecting the South Vietnamese scattered around the globe.

Still, the South Vietnamese flag is not without its controversial associations. If the official, five-pointed star flag of Vietnam is viewed as the communist flag, then the yellow flag with red stripes of South Vietnam is seen by some as the “anti-communist” flag. And in America, where the left is often painted by the right as being “communist,” the South Vietnamese flag began drifting towards becoming a politically conservative symbol. For some, the yellow flag with red stripes has become a shorthand for right-wing nationalism. It had been a constant presence at Trump rallies leading up to January 6th.

There’s something of a generational divide in the Vietnamese American community when it comes to politics. There’s even a support group on Facebook for Asian Americans with Republican parents that’s filled with second-generation Vietnamese kids. Like a lot of conservative America, Republican Vietnamese have been drawn to Trumpism. The South Vietnamese flag’s presence that day brought up a lot of questions for those who don’t want to see it co-opted by one political ideology. Many fans of the flag want it to retain more nuanced associations and providing a starting point for conversations about the shared (yet also diverse) culture and experience of the Vietnamese diaspora.

Previous Episode: The House that Came in the Mail
Next Episode: I Can’t Believe It’s Pink Margarine