The Cerulean Process by Emmett Fitzgerald

US history is filled with stories of medical quackery. And while most cure-alls were elixirs sold in bottles, we came across a strange, architectural panacea. For a brief time, back in the 1870s, some people thought that blue windows were the solution to just about every medical problem you could think of. The main purveyor of this belief was a Civil War general named August Pleasanton. 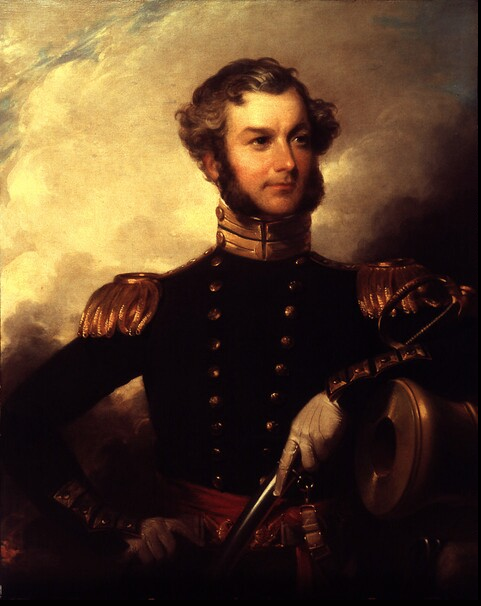 Pleasanton was something of an armchair scientist, and in between his military duties, he would read lots of books on physics and botany. Over time he developed some pretty strange opinions, but his strangest was about the color blue.“I have long thought that the blue color of the sky, so permanent and all-pervading […] must have some abiding relation and intimate connection with the living organisms on this planet,” Pleasanton declared. He began to argue that he could actually speed up growth in plants using blue light.

To test this hypothesis, Pleasanton built a giant greenhouse. It looked like a standard greenhouse, except that some of the panels in the roof were made of blue glass in order to let in a certain amount of “blue light.” In this “blue house” he grew grapes, and got some incredible results. He reported massive growth, huge vines and tons and tons of grapes.

After that initial success with grapes, Pleasanton started raising pigs and cows beneath blue glass panels. Word got out and soon he was being asked to give talks about his experiments. He extolled the virtues of blue light not just for raising grapes or pigs, but humans. He said that blue light caused an electrical current to flow through the body and invigorate the organs solving all kinds of physical deficiencies.

Pleasanton received a patent for his “cerulean process,” and he published a whole book about the value of blue light.

Pleasanton touted blue light as a cure-all for all sorts of human ailments—from skin conditions, to baldness, to insomnia. The book was popular, and soon people all over the country were demanding blue glass. “For about two years, 1876 and 1877, there [was] suddenly this huge fad for all things blue,” says Jenny Benjamin, curator of the Museum of Vision in San Francisco. People bought blue eye glasses and blue wallpaper, but the most common purchase was blue windows. People wanted to create a place in the house where you could go bathe in the blue light.

The “blue glass craze” was ultimately short-lived. Scientific American very publicly debunked Pleasanton’s wild claims, and people eventually stopped buying blue windows. There may still be some homes from that era out there with their original blue glass windows — we just haven’t found them yet!

Special thanks to Bart Bernhardt co-founder of Nerd Nite SF who wrote in with this story suggestion. https://sf.nerdnite.com/