Victorian nurse Florence Nightingale (played in this episode by her distant cousin Helena Bonham Carter) is a hero of modern medicine – but her greatest contribution to combating disease and death resulted from the vivid graphs she made to back her public health campaigns. 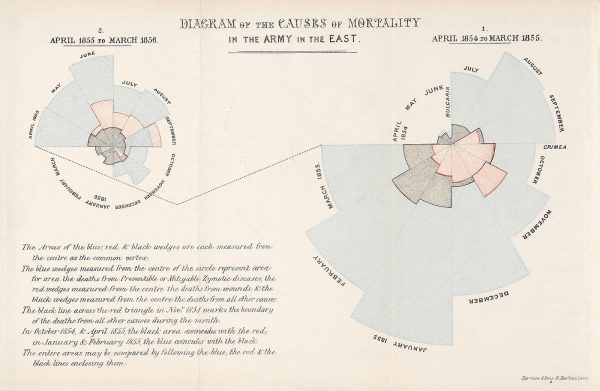 Florence Nightingale led a small team of nurses to Istanbul in 1854 to assist in the care of British soldiers fighting in the Crimean war. They were promptly overwhelmed by the sheer volume of casualties, chaotic logistics (“no mops, no plates, no wooden trays”) and shambolic political leadership. “This is the Kingdom of Hell,” wrote Nightingale. But while she is most famous as a nurse, Nightingale was also a massive geek. She was the first female fellow of what became the Royal Statistical Society, and never happier than when poring over a table of public health statistics. For Nightingale, however, the data were not just a passion but a weapon.

Her charts convinced the great and the good that deaths due to filth and poor sanitation could be averted – saving countless lives. But did Nightingale open Pandora’s Box, showing that graphs persuade, whether or not they depict reality?

Cautionary Tales is a podcast by Tim Harford from Pushkin Industries.

You can read more about the remarkable legacy of Florence Nightingale and the perils of misinformation in Tim Harford’s new book The Data Detective (US/Canada) / How To Make The World Add Up (UK / International).

Previous Episode: The Batman and the Bridge Builder
Next Episode: Artistic License