Mark Bloschock is an engineer from Texas, and in the late 1970s, he got a job with the Texas Department of Transportation renovating the  Congress Avenue Bridge. The bridge was a simple concrete arch bridge that spans Lady Bird Lake in downtown Austin. It needed to be rebuilt with more contemporary beams called “box beams.” The box beams sit below the road’s surface, and they needed to be spaced a certain distance apart. Bloschock and the other engineers decided that the gap should be somewhere between ¾ of an inch and an inch and a half, which didn’t seem like a particularly meaningful decision… until the bats moved in.

Every year around March, Mexican free-tailed bats (or Brazilian free-tailed bats as they’re also known) migrate from Mexico to Central Texas. And they’re looking for caves or old barns or some other protected spot where they can safely hang upside down. And shortly after the bridge renovation, the engineers realized that the spacing between the beams was the perfect size for bats… and they realized this because hundreds of thousands of bats had already moved in. 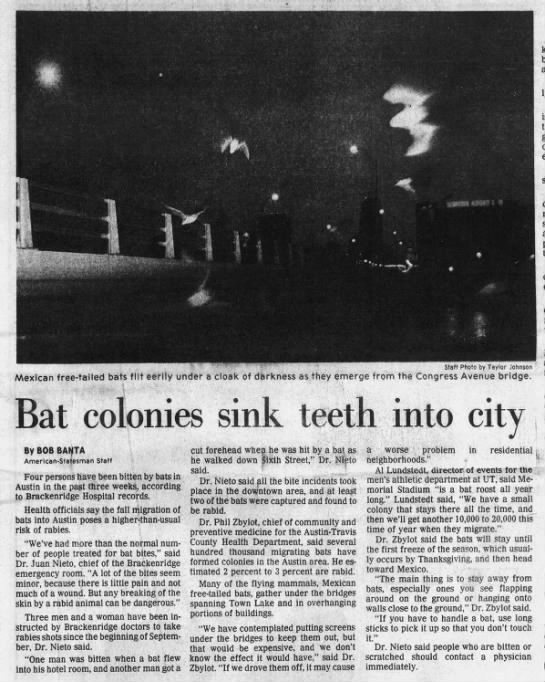 Initially, the people of Austin were not happy about their new neighbors of the night. The local newspaper the Austin American Statesman published headlines like “Bat Colony Sinks Teeth Into City and the New York Daily News went with “Mass Fear in the Air as Bats Invade Austin.” As the colony continued to grow, so did the hysteria. There were plans to remove, or even eradicate, the bats because people feared that they were a danger to human health and safety. But someone was about to arrive in Austin and stick up for these bats—an advocate of sorts, in the court of public opinion. He was an ambitious young biologist who was looking for a chance to show the world not only that bats weren’t as scary and dangerous as they were cracked up to be, but that we could live harmoniously alongside them, right in the middle of a city.

Merlin Tuttle is the founder of Merlin Tuttle’s Bat Conservation and one of the world’s most prominent bat scientists. He’s been obsessed with bats since he was a teenager growing up in the Tennessee hill country, right next to a bat cave. Tuttle eventually got a Ph.D. studying bats and took a job in Wisconsin as the curator of mammals at the Milwaukee Public Museum. But it was a tough time to be a young bat scientist. “A public opinion poll had just shown that bats ranked just below rattlesnakes and cockroaches on public opinion,” remembers Tuttle.

Bats were seen as little furry monsters that would suck your blood and get tangled in your hair. Tuttle says he would regularly read falsely-reported articles in mainstream magazines about swarms of rabid bats attacking people. Tuttle says it is a fact that bats are involved in the majority of rabies cases in the United States, and that rabies is an extremely deadly disease. But there are only one or two rabies cases a year in the United States, and in the vast majority of those cases, the person tried to handle a bat and was bitten in self-defense.

As it turns out, bats are incredibly important to the ecosystem. They pollinate plants like mangos, bananas, and agave. “Without bats, you could lose a more than a billion-dollar industry,” says Tuttle. Bats also eat tons of bugs, including lots of agricultural pests. By some estimates, bats save US farmers billions of dollars every year in pest control.

But in the early 1980s, as Tuttle traveled the world doing research, he saw that bats were in trouble everywhere he went. Bat populations were declining at an alarming rate because they were losing habitat to logging and agriculture. In some cases, they were even being slaughtered because they were thought of as pests. And so at a certain point, Tuttle realized that he could spend his whole life studying bats doing great science, but what good would it do if the animals he loved were despised by everybody else? He decided he needed to get out of academia and devote himself to protecting these misunderstood creatures.

In 1982 Tuttle launched an organization called Bat Conservation International based in Milwaukee and began touring the country preaching the bat gospel to anyone who would listen. Initially, it was tough going, but then a major opportunity fell into Merlin’s lap. He heard that a giant colony of free-tailed bats had moved into a bridge in Austin, TX and that the whole city was in an uproar. People were genuinely frightened, but Merlin saw the bridge as an opportunity to change people’s perceptions about bats.

Tuttle made a decision that would change the direction of his life, and the fate of the Austin colony. He decided to pack up his entire life and move to Texas. Austin would be the new home of Bat Conservation International, and ground zero in Merlin Tuttle’s public relations war on behalf of bats.

The Batman Cometh (to Austin)

When Tuttle first arrived in Austin, his pro-bat message was not received well. The magazine Texas Monthly gave Merlin their infamous “Bum Steer Award”—a tongue-in-cheek honor typically reserved for corrupt politicians and other dubious figures. And, to be fair, at the time the idea of SAVING bats seemed pretty dubious! At first, people were constantly calling the office with terrifying reports of bat encounters, but Tuttle always managed to calmly talk them down. He didn’t lecture anyone about how their fears were backward and misplaced, just listened and then explained how important bats were. With his calm, matter-of-fact style, Merlin won over farmers, and teachers, and public health officials. And then the media coverage started to shift.

The Statesman published articles reassuring the public that the bridge colony wasn’t a threat to public safety as long as people didn’t touch any bats. There were even articles celebrating the bridge colony in National Geographic. Some of those articles featured pictures that Tuttle had taken himself. He had taught himself photography as part of his mission to rebrand bats because he was tired of seeing photos that had been shot to make the bats look menacing.

Over time, citizens of Austin began buying into Tuttle’s pro-bat message. Students even started forming little bat conservation clubs. Little by little, Austin’s relationship with its bats shifted from fear to acceptance, and eventually even to enthusiasm. People realized that they had been ignoring this natural spectacle that was playing out every night—a million bats flying off against the backdrop of a Texas summer sunset. And the city started to embrace it. Businesses cropped up offering sunset bat cruises. At a certain point the newspaper, the Statesman, decided to build a bat viewing area next to their office. In 1990, four years after Tuttle moved to town, the mayor declared Austin the Bat Capital of America.

Bat Bridges for the Masses

Mark Bloschock, the engineer who built the bridge, didn’t mean for any of this to happen. But he watched with interest as his very practical piece of infrastructure became home to the world’s largest urban bat colony and one of Austin’s biggest attractions. In the years that followed, Bloschock started thinking about ways that he could help the bats. He wondered… what about all the other bridges in Texas? There must be more bat colonies out there. And so, with the help of another bat scientist named Brian Keeley, and funding from the state of Texas, Bloschock started traveling the backroads in search of bat bridges.

Bloschock and Keeley found that at least 11 million bats in Texas were relying on bridges and culverts for daytime shelter, and then in a national assessment, they determined that bridges and culverts were providing important habitat for endangered bats around the country. The two came up with guidelines for the Texas Department of Transportation to start intentionally designing bridges to attract bats. Now if they’re building a bridge in a place where a bat colony makes sense, they will space the box beams the way they did at Congress Avenue, between ¾ of an inch and an inch and a half apart…just how the bats like it. Conversely, if they’re building a bridge with lots of pedestrians where it might be dangerous for bats and humans to be in such close proximity they will build the beams greater than two inches apart and the bats will not nest there.

Bloschock ended up spending much of his career working alongside biologists to make infrastructure more bat-friendly. Biologists and engineers are often thought of as in conflict; engineers are on the side of humans, while biologists only care about wildlife. But Mark says it doesn’t have to be like that: “The two things can go together. It doesn’t have to just be about concrete and steel and advanced materials and stress and strain and durability and cost.  There can be other things that we do that positively affect the natural environment.”

As for bats, they are sadly still very much in trouble, from old threats and new ones. In recent decades a fungus called white-nose syndrome has wreaked havoc on hibernating bat populations across the U.S. Conservationists are working hard to find solutions, but if bats are going to thrive in our rapidly changing world they’re going to need our help. And if there’s one place that has shown us the way, it’s Austin.

Sunset Over the Bat Bridge

Every night in the summer people line up on the Congress Avenue bridge and gather around to see the bats take flight. Ladybird lake is filled with kayaks and canoes and pontoon boats, and then right at sundown, 1.5 million free-tailed bats start to trickle out of the bridge. The bats fly off downstream to begin their nightly feast of mosquitoes and moths. Over the course of an hour or so, the flow of bats increases until they form a river in the sky that stretches for what feels like miles. Merlin Tuttle has traveled the world to see bats in incredible wild places, but he never gets tired of a night at the bridge. “I mean it’s just truly spectacular,” says Tuttle, “It’s one of these spectacular natural events in the world. And it’s right in the middle of a city.” 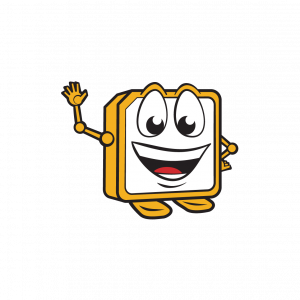 Light access (both day and night) is a basic need many people take for granted. SolarBuddy is an Australian charity uniting a global community with a big dream to gift six million solar lights to children living in energy poverty by 2030, to help them to study after dusk and improve their education outcomes. Their main effort is renewable energy-powered light that became a solution in refugee camps across the world. But through finding one solution, the company’s founders soon realized the enormity of energy poverty, and set about raising global awareness and designing solar light solutions.

99% Invisible’s Impact Design coverage is supported by Autodesk. The Autodesk Foundation supports the design and creation of innovative solutions to the world’s most pressing social and environmental challenges. Learn more about these efforts on Autodesk’s Redshift, which tells stories about the future of making across architecture, engineering, infrastructure and manufacturing.