In early 2009, Christie’s International in Paris held a much-anticipated three-day auction from the private art collection of the late fashion designer, Yves Saint Laurent. The items up for sale were 733 pieces that Saint Laurent and his partner, Pierre Bergé, had amassed over five decades. The French press dubbed this the “sale of the century.”

Two of the most anticipated items of the event were a pair of bronze animal heads from China—one of a rabbit and one of a rat, each dating back to the 18th Century Qing dynasty. On the third and final day of the auction, the bronze heads went up for sale one at a time. The rat and the rabbit bronzes sold for fourteen million euros each to the same bidder—an art collector and dealer named Cai Mingchao. But when it came time to pay the bill, Cai had a surprise: he would not pay up. In fact, Cai had purposefully sabotaged the sale of the heads as an “act of patriotism” for China. 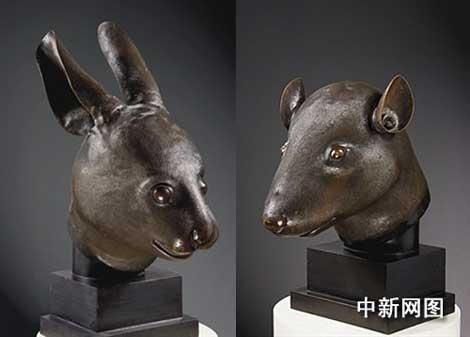 As it turns out, the rabbit and rat bronzes weren’t just decorative works of art destined to sit under a dusty glass case in some private collection. The animal heads had been looted from China during one of the worst incidents of cultural vandalism the country has ever seen. By stopping the sale, Cai was signaling to the world that China wanted its stolen heritage back. These bronze heads have become arguably the most prominent symbols of a growing concern around the repatriation of Chinese artifacts  — these antiquities are highly sought after not for their artistic value, but rather the story they tell and meaning they hold for the government of China.

The Garden of Perfect Brightness 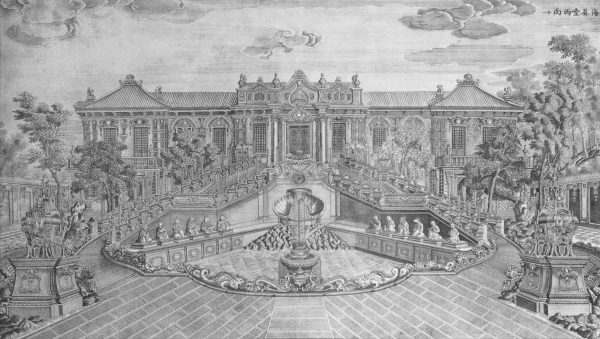 The bronze heads were originally part of a fountain featuring the twelve animals of the Chinese zodiac. These fountain heads would spout water out of a different animal’s mouth for two hours a day every day to signify the passing time. The animal fountain was a hybrid of European and Chinese design built by Italian Jesuit Giuseppe Castiglione for a European-themed garden within a much larger and more extravagant Chinese palace complex called Yuanming Yuan.

“The translation of Yuanming Yuan is often given as ‘the garden of perfect brightness’,” explains Patricia Yu, who studies the history of art at UC Berkeley. Yuanming Yuan was an immense garden complex first constructed in the 1700s for the imperial family of the emperor of the Qing dynasty. It was his “home away from home” (his primary residence at the Forbidden City) yet roughly the size of Central Park, made up of hundreds of pavilions and packed with all sorts of spectacular art and architecture. Yuanming Yuan may have symbolized imperial grandeur, but its story would be defined by tragedy.

Towards the end of the second Opium War in 1860, Qing officials captured and killed a British and French delegation; in response, Western forces advanced toward Yuanming Yuan. When soldiers arrived at the palace, a frenzy of looting took place. They spent days grabbing everything of value, and whatever they couldn’t carry they destroyed. They smashed vases and mirrors. There are even accounts of soldiers using rare manuscripts from the library to light their pipes. Even the emperor’s pet Pekinese dog was stolen from the palace and gifted to Queen Victoria, and renamed “Looty” in the process.

“By some estimates, maybe one point five million pieces were there — and all of that was taken,” says Frederik Green, Associate Professor of Chinese at San Francisco State University. Once everything of value was collected, the soldiers set fire to Yuanming Yuan. The complex was so large that it took three full days to burn down. Ironically, one of the few structures that survived from this resplendent Chinese palace was the stone facade of the European section where the bronze zodiacs had once stood — baroque remnants of an homage to Western architecture.

Sometime during the looting, the bronze fountainheads were torn from their bodies, but at that point, they were just twelve of those 1.5 million pieces. No one paid them any special attention and they went missing in the chaos, presumably lost forever.

Lark Mason is a specialist in Chinese works of art and president of the Appraisers Association of America. But in 1987 he worked for Sotheby’s and he received a very interesting phone call from a couple looking to have a pair of antiquities valued. “They brought them into our gallery and I watched them as they opened these up and put them before me and thought, ‘Oh my gosh … these are wonderful, but what are they?'” he later recalled. After some research, he realized they were a part of twelve bronze heads from the European fountain of Yuanmin Yuan.

Later, in 2000, three bronze heads went up for sale at Sotheby’s and Christie’s. “We gave this auction the code name ‘Yuanming Yuan’, and that was kind of where all the trouble started,” explains Audrey Wang. Wang is the author of Chinese Antiquities: An Introduction to the Art Market and was also an Asian Art Specialist with Christie’s handling the sale of two of the bronze heads.

She says that since the 1990s Christie’s had always had imperial items for auction and she expected this sale to be business as usual. But it went very differently than the last time the bronzes had appeared on the auction block. What they hadn’t realized was that the sentiment around the bronzes had shifted. On the day of the auction, Wang was met with a sea of protesters trying to block the sale of the heads.

Every time these bronze heads pop up for auction they arguably send a very specific message to those in the know — that the right thing to do would be to return stolen cultural property back to its country of origin. But according to some people, including the artist Ai Weiwei, the zodiac heads aren’t valuable cultural relics but rather pieces of propaganda.

Ai Weiwei has been openly critical of the Chinese government’s mission to repatriate the bronze heads—so much so that he even created his own art piece called Circle of Animals / Zodiac Heads which was a reinterpretation of the bronzes.

To Ai, the animal heads aren’t Chinese cultural relics at all, especially if you consider that the bronze heads were actually designed by Europeans. “The work is made by a famous Italian priest working in the imperial court,” explains Ai, “so by its design and its craftsmanship and how it functions in this imperial garden it is not very Chinese. To choose that symbolic [of] Chinese treasure is ridiculous,” he maintains.

If you went back to 1987 when the first two bronze heads appeared on the scene, no one was looking for them. In fact, Chinese leadership wasn’t dwelling on the history of Yuanming Yuan at all. Yuanming Yuan was a mostly neglected site throughout the 1970s and 80s. Artists like Ai Weiwei took over the space and actually lived and worked in the forgotten ruins of the European garden. But that all changed after the Tiananmen Square Massacre in 1989. As Frederik Green explains, party elders interpreted the events as a challenge to Communist rule.

In response to those events, Chinese leadership felt that they needed to restore Communist Party loyalty in younger generations. They did this by reshaping China’s historical memory through a curriculum called Patriotic Education. “[The] Patriotic Education Campaign started shortly after the student movement in 1989, and it’s related to [a change to] history textbooks,” says Zheng Wang, a professor at the School of Diplomacy and International Relations at Seton Hall University, and author of Never Forget National Humiliation.

Patriotic education was intended to boost national pride and loyalty by teaching China’s youth a curriculum that both glorified the Communist Party’s accomplishments while also emphasizing how China has been a victim to foreign powers. At the heart of the Patriotic Education campaign was the Century of Humiliation. 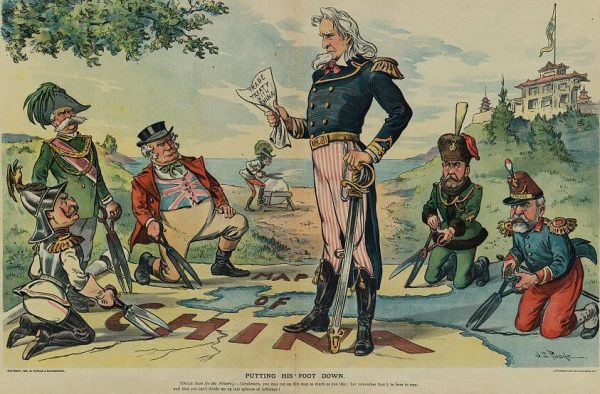 As Wang explains, the Century of Humiliation is a special narrative in China that tells the story of the roughly 100 year period between the First Opium War and the founding of the Peoples’ Republic of China in 1949. During that time, China suffered considerably at the hands of foreign powers and this period is viewed as the darkest moment in China’s history.

The plunder of Yuanming Yuan was viewed as a key event in the Century of Humiliation because of the tremendous loss of cultural heritage. To some extent Yuanming Yuan is seen as a symbol of national humiliation and has been used as a site for patriotic education purposes. The goal was to make sure younger generations never forgot the lowest period in Chinese history or the destruction of Chinese culture by foreign invaders. Yuanming Yuan and the bronze zodiac heads were physical reminders of imperialist aggression.

But critics like Ai Weiwei have pointed out that if the Chinese government wanted to bring attention to the destruction of Chinese heritage, maybe it should look at its own actions. Just to take one example, during the Cultural Revolution, countless amounts of Chinese relics and cultural heritage sites were destroyed at the hands of the communist party. So to Ai Weiwei, focusing on the story of the bronze heads felt like an incomplete telling of history and that the Chinese government was manipulating the past to frame the communist party as the victims rather than the perpetrators of culturally destructive practices. “China has been victimized by the imperial states, but—still China is a bigger victim by its own government,” says Ai.

It makes perfect sense that illegally stolen relics should be returned to their country of origin, whether it’s Greece, Ethiopia, or China. Nonetheless, many people don’t necessarily like the way the “right thing to do” has itself been commandeered for political purposes. The bronze heads have the unfortunate burden of being both cultural heritage and propaganda, but as Patricia Yu says, any national treasure is at least a little bit of both. “Nothing is neutral [and] all of the values that we put upon objects and sites are constructed; they are negotiated; they are challenged.”

Return of the Head

In December of 2020, the State Administration of Cultural Heritage in China celebrated a big victory. To mark an important anniversary of the sacking of the palace complex, the bronze horse head went on display at Yuanming Yuan park. It was the first zodiac bronze to return to the grounds since they were looted from the site 160 years ago. It’s unclear whether the other bronzes will eventually join the horse on the grounds. As of now, seven of the twelve known bronze heads have been located and returned back to China. No one knows if the dog, rooster, dragon, sheep and snake will ever turn up.

Walking through visually rich cities, it is easy... [Read More]