What happened to the laugh track? For nearly five decades, it was ubiquitous, simulating in-person audience experiences in home living rooms. But beginning in the early 2000s, it fell out of sitcom fashion. So how did we get from Beverly Hillbillies to 30 Rock?

In this featured episode, we meet the man who created the laugh track, which originated as a homemade piece of technology, and trace that technology’s fall and the rise of a more modern idea about humor. 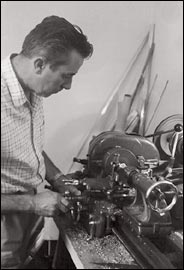 Charles Douglass‘ creation, the “Audience Response Duplicator” (or: “Laff Box”), recombined recorded laughter, available on demand. This was particularly useful as live comedy gave way to videotaped shows. At first, Douglass’ approach was used sparingly, to fill in gaps when actual audiences failed to pick up on a joke as intended (they were also slowly muted if they laughed for longer than producers wanted).

The machine evolved to look somewhat like a typewriter, but with keys that let sound engineers like Douglass press buttons to make sounds. As shows were increasingly filmed without studio audiences, the box became essential, but its design remained a closely guarded secret. The individual boxes were covered up and locked down when not in use.

For years, Douglass had a virtual monopoly on the business. And for decades, many shows were essentially designed around spaces left for laughter, resulting in somewhat depressing results when it’s removed.

In recent years, the laugh track has fallen back out of favor. Some shows, like Sports Night, spanned a transitional period, starting out with a laugh track that grew softer and was eventually dropped entirely.

With the help of historians, laugh track obsessives, the showrunners of One Day at a Time and the director of Sports Night, Decoder Ring asks if the laugh track was about something bigger than laughter. Subscribe to Decoder Ring in Apple Podcasts.

Ever since the automobile became a driving force in American and... [Read More]

Reverb: The Evolution of Architectural Acoustics