There’s a term that epitomizes what we radio producers aspire to create: the “driveway moment.” It’s when a story is so good that you can’t leave your car. Inside of a driveway moment, time becomes elastic — you could be staring straight at a clock for the entire duration of the story, but for that length of time, the clock has no power over you.

But ironically,  inside the machinery of public radio — the industry that creates driveway moments — the clock rules all.

At NPR’s studios in Washington, DC, there are clocks everywhere. Big red digital clocks, huge round analog clocks. There’s even special software and time calculators, where 60 + 60 = 2’00.

Each show has a ‘clock’, a set template, from which the show almost never varies. Every show that broadcasts—or aspires to broadcast—in the public radio system has a clock. This is the All Things Considered broadcast clock, which NPR and stations across the country refer to on a daily basis: 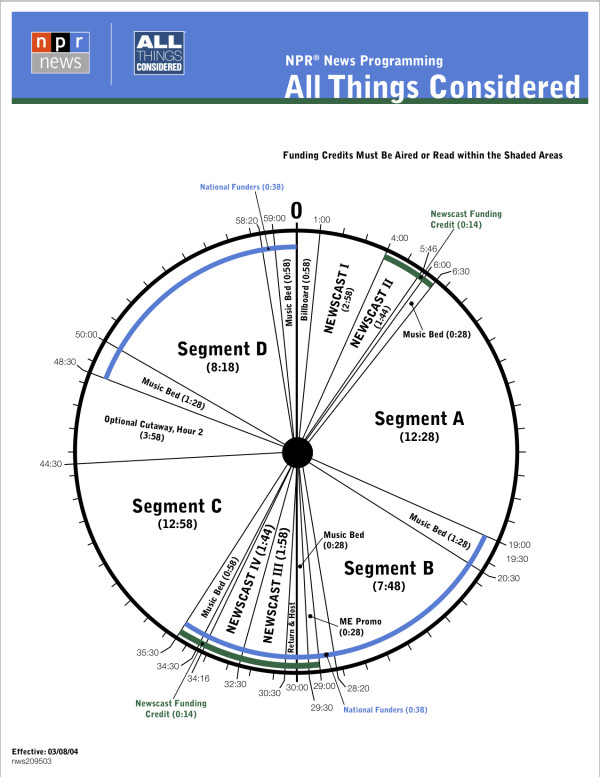 Here’s how it works: at the ‘top’ of the hour, there is a 59 second “billboard,” which announces what’s going up in the program. Then there’s five minutes for the newscast, which is itself divided into two segments (“Newscast I” and “Newscast II”). Then there are the “blocks” — A, B, C, and D — which is where the stories and interviews (or “two-ways”) live.

Segments can’t run long by even a second, because most of the local stations are automated to cut off the national program where the clock says they can. These times — the dividers between the sections on the clock — are called posts. You have to hit the post. Nothing can go wrong.

Though, of course, things go wrong every day.

Taking care of the clock is so ingrained in the director’s psyche that a common side effect of the job is waking up in the middle of the night fearing that you’ve blown the post — these are called “director’s dreams.” To cope with the anxiety, ATC directors make their own cheat sheets to help them memorize every queue of every hour of broadcast.Visit any studio that does a regular live feed with a broadcast clock and you’ll likely find a cheat sheet one somewhere in the studio. 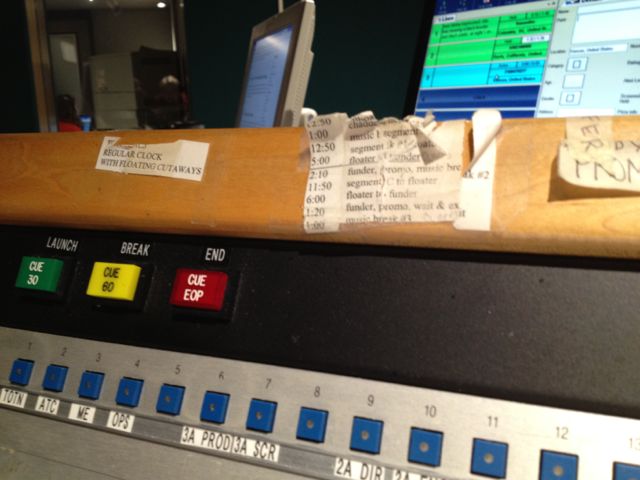 The director’s cheat sheets at ATC  have been used so much that they’re in tatters. They have since been laminated.

When NPR began in the early 1970s, show clocks were much less regimented — or they didn’t have clocks at all.

One of the early champions against the fixed clock was Bill Siemering, a founder of NPR who helped design the network’s overall sound. He came up with the name All Things Considered (original title: A Daily Identifiable Product). Siemering wrote the mission statement of NPR, which is enshrined in the halls of NPR (note the text on the walls).

Siemering liked a clock that was more free-form, because it allowed for spontaneity and unpredictability. But spontaneous and unpredictable does not always make for compelling radio. Done wrong, and you wind up with laughably bad “Schweddy Balls”-grade public radio.

When Siemering left NPR in the early 1970s, NPR chose to have more subdivided clocks. The constraints forced the shows to get tighter, which some say makes NPR stronger. One person is Neal Conan, former host of Talk of the Nation, who maintains that the earlier, freer days of NPR were not as halcyon as some may remember them.

These days, podcasting allows for shows such as this one to be free of a post, and go on for as long or short as is fitting for any given story. 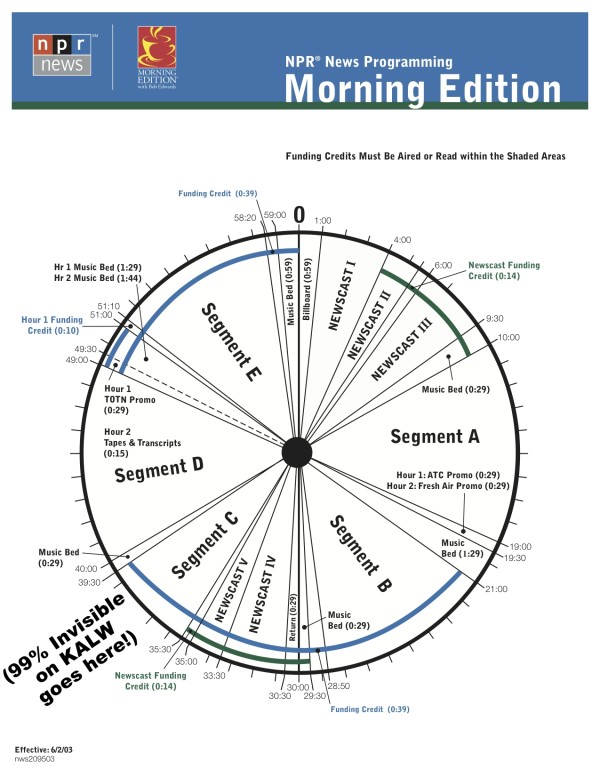 Many thanks to All Things Considered Executive Producer Chris Turpin and the other powers-that-be at NPR who gave us unfettered access to the shop during Julia’s visit.

(Note: Julia visited NPR while they were still at 635 Massachusetts Ave, NW. They have since moved to 1111 N. Capitol St.)