Activating “Sabbath Mode” on a GE refrigerator disables interior lights, display panels, alarms and beeps as well as ice and water dispensers.  In that mode, opening the door triggers no changes, including normal cooling processes to compensate for temperature loss. So why would anyone want to disable such key functionality on a home appliance?

“The observance of the Sabbath and religious holidays in Judaism requires a restriction on certain activities during holy times,” explains GE Appliances — and some of those Halakha (Jewish law) restrictions involving turning things on and off, or even adjusting settings on electrical devices. So the company works “with third party kosher certification agencies … to develop Sabbath Mode features” for many of its appliances, including ovens and dishwashers.

Inside the Lines: “Eruv” Wires Symbolically Extend Homes to Encompass…

It gets complicated quickly, but in essence: various prohibitions forbid certain sects of Judaism from working (in any capacity) on the Sabbath. For observers, this can apply to anything from making fires and preparing food to pushing buttons and flipping switches. “For decades,” explains Dan Levin in a New York Times article, “Orthodox Jews trudged through their houses in a pre-Sabbath ritual of turning off home security systems, taping down the button that turns on the light inside the refrigerator when the door is opened, and lighting a flame to leave burning on the stove so food can be heated.” Some Jewish people also ask non-observant friends (or hired individuals) to flip switches and carry things for them, but this practice can be controversial. Such “sabbath goys” have included some very famous people.

But in recent years, large established companies as well as smaller startups and innovative entrepreneurs in the kosher gadget industry have begun to rethink cars, phones, alarms, microwaves, lamps, coffee machines and other everyday gadgets and technologies.

A number of big appliance makers have adapted major product lines, adding new options. “Manufacturers like Whirlpool and Viking have put Sabbath mode settings on most of their ovens, refrigerators, and even wine cellars,” writes Levin, and “General Electric introduced its Sabbath mode in 2000 … the special setting is featured on more than 150 of its wall ovens, ranges and other cooking appliances.”

Smaller companies have also designed specialty products explicitly around. There are lamps, for instance, that are made to be left on continuously, but feature movable parts for variable illumination — shifting a lamp shade is permitted, but turning a light on or off is not. 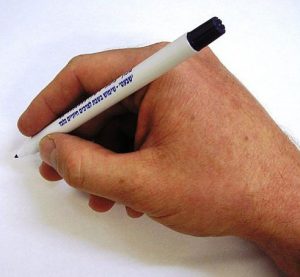 Other creations address non-technological rules as well. In response to a prohibition regarding permanent writing on the Sabbath, rabbis, scientists and engineers of the Zomet Institute created specialized pens with ink that disappears after a few days. It sounds like a simple thing — not writing for a day now and then — but imagine, for example, the implications for medical records at a hospital. Zomet has also developed compliant locks, wheelchairs, phones, keyboards, baby monitors, cow-milking machines — and the list goes on.

Some solutions also highlight internal debates about what is permitted. Consider Shabbat elevators, for instance. In practice, these are built to function in various ways — some go all the way to the top, then descend floor by floor; others stop at each floor in both directions; still others stop on alternating floors. But in all cases, buttons are disabled, so no circuits are closed and no floor numbers are displayed. There are arguments, however, that adding weight to the elevator changes its operations, and thus represents a violation. On the way up, extra energy is deployed to raise a lift. On the way down, a person’s mass aids in the elevator’s descent, indirectly saving electricity.

Paternoster Lifts: Cyclic Chain Elevators With No Buttons, Doors or…

As this one particular technology illustrates, there are disagreements about what devices and use cases are acceptable, and attempting to interpret historical traditions in modern contexts can be challenging. Regardless of ongoing debate, though, there seems to be a market for novel kosher solutions to these ancient religious restrictions.

Drive-in theaters have come a long way since... [Read More]