In 1885, Austin, Texas was terrorized by a serial killer known as the Servant Girl Annihilator.  The murderer was never actually found, but he claimed eight victims, mostly black servant girls, all attacked in the dark of night. The very, very dark night of Austin in 1885.

Back then, once night fell, Austin had only moonlight.  The city had no outdoor lighting until 1894, when Austin decided to buy more moonlight, in the form of towers.

They were fifteen stories tall, each crowned with a circle of six lights, soaring way up above the city.

Austin wasn’t the first to implement “tower lighting.” In the 1800s, several major cities had tall arc towers, including New York, Baltimore, Los Angeles, and San Jose. Detroit, however, had the largest tower lighting system in the country, and that’s where Austin bought its 31 moonlight towers from.

The height of the Moonlight Towers was a means of accommodating the lighting technology at the time: carbon arc light, a precursor to the incandescent bulb.

Arc lights are essentially a continued spark between two carbon electrodes. They are extremely bright and produce a lot of glare — the sort of thing you use in a searchlight. Arc lights at street level would be blinding, so municipalities put the lights up high in order to spread the glare out.

Still, even on their high tower, arc lights were tremendously bright. Their light would be harsh by modern standards, but they were an especially stark contrast to gas lamps. A gas lamp has the power of about 15 candles. An arc light has the power of a couple thousand.

Arc lights were so bright that people would actually bring out umbrellas at night in order to shield themselves from the glare.  The lights also buzzed loudly like a swarm of bees, and as the carbons burned, they would drop shreds of burning ash on the people below.

Still, arc lights were exciting. They transformed the experience of being in a city at night. People spoke of seeing the grass in a totally different way, and people loved to look at their hands under the arc light. Urban dwellers could see the world — as it were — in a whole new light.

The night lights also made people feel safer. There was even speculation that the streetlight could eliminate the need for law enforcement entirely. Moonlight towers were sometimes nicknamed “policemen on a pole.”

At the same time, citizens were also concerned about what it meant for darkness to disappear. Might the towers cause sleeplessness? Would crops overproduce and hens overlay? Might cities be inviting a scourge of crickets? 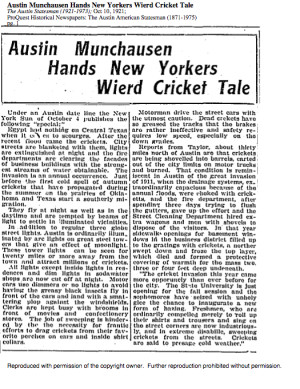 However, the biggest problem with the towers was that their height made them difficult to maintain. The arcs burned down the carbon electrodes quickly, and they had to be changed once a day. Maintenance men would pull themselves up the tall towers on a dumbwaiter-like apparatus to go change the carbon electrodes every single day.

By the 1920s, Austin replaced the carbon arc lights with dimmer, more easily-maintained incandescent bulbs. Most other cities had already removed their moonlight towers at that point, but Austin couldn’t afford to tear theirs down. The towers remained, and to this day, seventeen of the original 31 survive. The last of the moonlight towers.

Now, without the carbon arc lights, moonlight towers have a kind of weak and distant glow. They’re easy to ignore. Unless you’re watching the Richard Linklater film, Dazed and Confused.

Dazed and Confused is set in Austin in 1976. In the movie, a bunch of kids party and drive around until they all gather, at the end, by a moonlight tower. Some of them even climb up the moon tower.

In real life, moonlight towers would be really difficult to climb. Which is why, for this scene, Richard Linklater made a fake moonlight tower that had a ladder instead of the central pulley apparatus.  Also, it was nowhere near as tall as a real moonlight tower.

There came a point when Austin considered finally considered taking the old lights down, just like all the other cities had done, but eventually, the towers were inducted into the National Register of Historic Places in 1976. Some of the towers even have plaques.

Because the moonlight towers are in the National Register of Historic Places, they have to be restored to their original form. They are repaired with custom-cast parts that look identical to the original moonlight towers, so that antiquated lights can keep their historic designation.

This specialized repair work comes at a hefty price, but Austinites are willing to put up the funds. The towers are a point of civic pride. Every year during the holidays, Austin Energy strings Christmas lights from the moonlight tower in Zilker Park, and Austinites call that tower the Zilker park “tree.” Austin also hosts the Moontower Comedy Festival, and there’s a local band called Moonlight Towers, and at a restaurant, you can order a drink called a Moontower.

The towers have become part of the character and folklore of Austin. Including the legend of the Servant Girl Annihilator. In truth, the servant girl murders were all over with years before talk of the moonlight towers ever came up, and there’s no evidence directly linking the killer with the need for the towers.

Still, the Servant Girl Annihilator has become the genesis story that Austinites tell about these lights. Whether or not there is truly a direct connection, the story of the Servant Girl Annihilator does illustrate the limitations of 19th century night time and describes how carbon arc streetlights were chasing away fear and darkness. A kind of darkness which we can’t fathom in a city today.

Previous Episode: Of Mice And Men
Next Episode: La Mascotte