Byōdō-in is one of the most celebrated Buddhist temples in Japan. This idyllic structure was built in the 11th century to emulate Buddha’s palace in paradise and is even featured on the back of the ten yen coin. But Byōdō-in, along with 80% of the temples in Japan has been facing a threat unlike any they’ve encountered: raccoons. Japan’s iconic Buddhist temples have been plagued by raccoon infestations and they’re causing major structural damage.

Because most of these temples are located in isolated, forested regions, they make ideal spaces for wild raccoons to nest. They scratch up pillars, punch holes through ceilings, shred wires and wood, and leave feces everywhere. But this is a relatively new problem because up until the 1970s, there weren’t any raccoons in Japan.

In 1963, Sterling North released his memoir Rascal: A Memoir of a Better Era documenting his childhood and misadventures with his best friend, a baby raccoon named Rascal. In 1977 Nippon Animation adapted into a children’s anime called Araiguma Rasukaru. It was a HUGE hit with the youths and became so popular that Japanese families began importing baby raccoons by the thousands from North and South America to keep as family pets.

Much like the conclusion that Sterling North himself draws in his memoir, Japanese families soon realized that raccoons make horrible house pets. They’re aggressive, wreck your home, and cause mischief. So, much like Sterling North at the conclusion of his memoir, Japanese families released their raccoon pets back where they belonged—the wilderness. The problem was that the Japanese wilderness wasn’t where raccoons belonged. 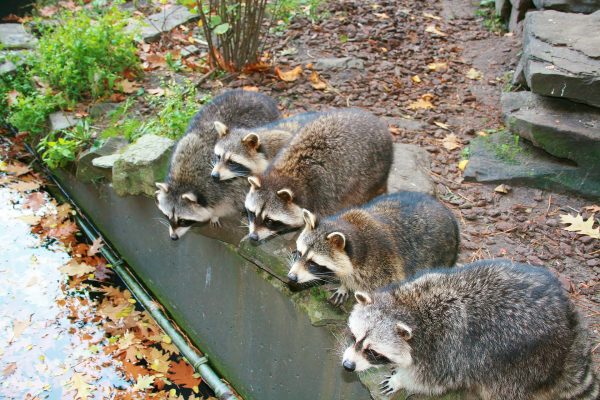 With no natural predators, raccoon populations exploded, and can now be found in 43 out of 47 of Japan’s prefectures, and have caused at least $300,000 worth of damage to crops on the island of Hokkaido alone. They prey on native birds, get into garbage cans, and yes— wreak havoc on ancient Buddhist temples. It’s been a constant battle to control raccoon populations, and so far, Japan has been on the losing side.