The United States Military is not known for being touchy-feely. There’s not much hugging or head-patting, and superiors don’t always have the authority to offer a serviceman a raise or promotion.

When a member of the Army, Navy, Air Force, Marine Corps, or Coast Guard wants to show appreciation, love, sympathy, or professional connection, they can use challenge coins.

Challenge coins are not currency. Different branches of the military have different uses and customs for them, but when they’re being given or exchanged, the coins serve as literal tokens of gratitude. They can symbolize everything from a nod of appreciation to a deep personal connection.

Challenge coins don’t exactly look like regular coins. First of all, they’re usually pretty large– about two inches in diameter– and they can be in any shape and color imaginable. They can look like a ninja star, or a crown, or a ship, and be covered in glitter or glow-in-the-dark paint. Some have centers that can spin or have a built in bottle opener.

Within the military, coins are exchanged with a traditional handshake. The coin-giver places the coin in their palm and reached out to shake the hand of the coin-recipient. Then, hand grasped, they turn their handshake over so that the coin falls from one palm to the other.

The handshake is not necessarily standard practice, since coins are also given out occasionally to civilians. For that reason, you end up finding coins in places where you would not expect to find a connection to the military, such as in the hands of anti-war academics or journalists. When these coins get given out, they are a physical reminder of the fact that the military is not some faceless monolithic structure. The coins show that the military is an organization made of human beings.

Those bottle opener challenge coins could come in handy, because challenge coins are often used to play a drinking game. Different branches of the military have different rules for the game, but the gist of it is this: you can throw down your coin, and perhaps holler out “coin check!”; everyone else in the group must pull out their challenge coins, and whoever doesn’t have one buys a round of drinks.

But—if everyone has their coin on them, the person who initiated the coin check is liable for the tab.

Not all of the branches of the military are into the drinking game, but those who play are in it to win it. Some have their coin on them at all times, even when they’re sleeping, running, or showering. You just never know when you could get checked.

As far as the history of challenge coins  goes, there’s a sort of apocryphal story that traces them back to World War I. According to the story, an American army officer had some special coins minted for his men on whim.  Later one of these men was captured by French soldiers and he used his coin to prove he was an American and not a German. But that’s just one version of the origin story.

However they came about, the coins have always been about identity. Each unit designs their coin to tell a story about how they want to be perceived. Since identity in the military has a lot to do with hierarchy, there is also a hierarchy with challenge coins. As you move up through the ranks, challenge coins become more essentially valuable because they’re harder to get. It’s difficult to get a Chief of Naval Operations coin. It’s exceptionally rare to find a presidential coin—but they do exist.

The president’s coin is the rarest there is. This is a video of Obama giving his coin to a woman who lost her brother in Afghanistan:

The military isn’t the only institution to use challenge coins, although they were the first. Now some police and fire departments make coins, along with NASA, sports teams, and even performers and musicians who tend to perform for soldiers on USO tours.

Really anyone can design a coin and then just go online and order it. That’s basically what the military does, since these coins are manufactured with by private mints with private funds.

Because the coins are not in any sort of budget, there’s no set procedure or rules for making them.  This means the design process is very informal. Usually, after a unit raises the fund to order some coins, they find a design by just sitting down and talking about what they want on their coin.

Then someone in the group will make a sketch or a rough mock-up, which they then send to the manufacturer.

The individual coins take on a whole new meaning when a whole collection is displayed together.

A lot of active and former military members have displays (or even build custom furniture) to show off the coins they’ve acquired over the years. 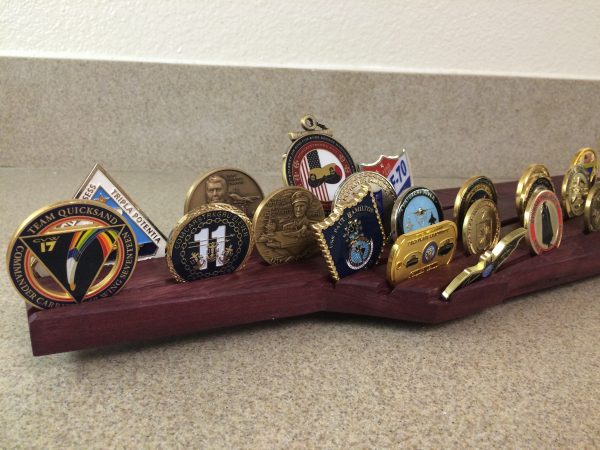 Actually, in Bill Clinton’s presidential portrait, he’s posing in front of his collection of challenge coins. 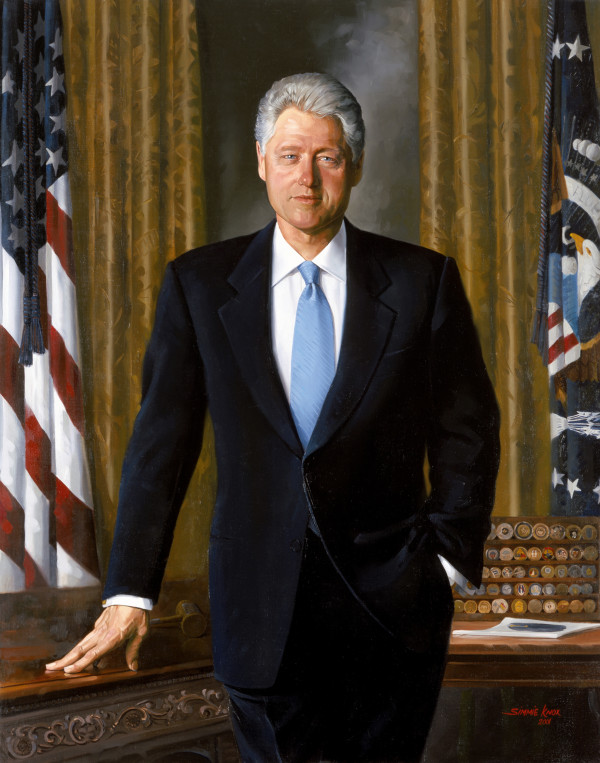 But these coins displays are not a flashy show of achievement. Quite the opposite. The coins are physical proof of hard fought relationships.