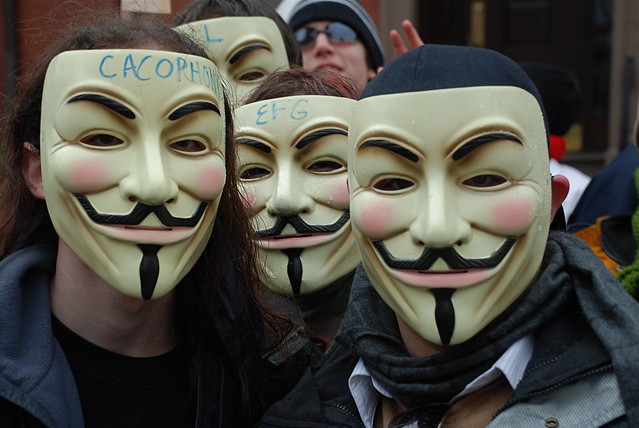 Greetings 99th Percentile!  My name is Sam Greenspan (Ed note: See photo, center background. Not really.), and I’m the new guy helping out with the show.  I’ll be contributing to the blog, occasionally telling stories on the show, and pulling all kinds of levers and knobs behind the scenes.

Roman is hard at work putting together this Friday’s episode—the story of how the Anonymous movement came to be known by the Guy Fawkes mask.  (And trust me, it’s not what you think.)

To tide you over til then, check out this story that Carrie Kahn reported for NPR earlier this week about the Occupy movement’s use of the “people’s mic.” Even though the people’s mic was born out of a need—loudspeakers were banned in Zucotti Park—the Occupy protestors are finding that this call-and-response form of decision-making has become emblematic of their ideals.

What stories have you heard in the news that deal with design?  Let us know!