Western tuning is the most common musical tuning system we have today and was standardized so that musicians can be on the same page as one another. It’s based on the A note above middle C (also known as Concert A) being calibrated to 440 hertz or cycles per second.

In the 19th century, however, European concert halls were being built larger and larger, and this was causing orchestras to tune much higher than 430hz. In a large room, lower frequency notes would travel farther than higher ones, and higher frequency notes would also be more easily absorbed by construction materials and people’s clothing. The high notes would be dampened and the whole orchestra would sound dull. To compensate, orchestras would tune higher and higher to achieve a brighter sound.

This put string makers through their paces because older strings made from gut would be snapping constantly, so strings made from steel and nylon were developed to meet this rise in tuning. Opera singers were affected probably the most. Singers were straining their voices trying to sing classic pieces that were originally written between 415hz-430hz. The strain on singers got the attention of the French government and is largely what lead to a number of attempts at creating a standard tuning, including a mandate for Concert A to be 435 Hz in article 282 of the 1919 Treaty of Versailles. 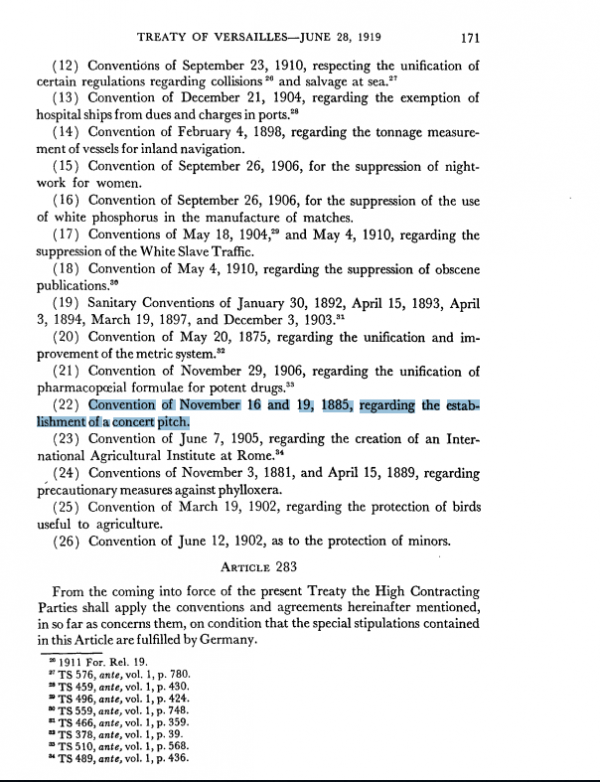 London’s Royal Philharmonic Society would still tune higher to about 439 Hz though. This was because the mandate specified that Concert A should be 435 Hz according to a tuning fork of a specific weight at 15 degrees Celsius. The temperature was specified so that the metal tuning fork could be accurately reproduced, but British orchestras reasoned that their concert halls were warmer than that, and so to compensate they would tune higher.

It wasn’t until 1939 that another conference of nations decided to convene and establish one standard tuning once and for all. The advent of radio broadcasts had made it impossible to ignore because you could hear orchestras tuned at different frequencies back to back. At this conference, it was decided to set Concert A at 440 Hz no matter the temperature of the concert hall.