During the 1961 Berlin Crisis — one of the various moments in the cold war in which we came frighteningly close to engaging in actual war with the Soviets — President John F. Kennedy vowed to identify spaces in “existing structures both public and private that could be used for fallout shelters in case of attack.”

After JFK’s speech, a fallout shelter economy sprung up overnight in the U.S. There were door to door bomb-shelter salesmen, shelter displays at malls and county fairs, and pamphlets for sale on every magazine rack.

But by the time Kennedy made that speech, one small town in Southern New Mexico had already broken ground on a unique shelter that would double as an elementary school.

Artesia, New Mexico is located about 40 miles south of Roswell. It was near the now-closed Walker Air Force Base and White Sands Missile Range and had its own oil refinery — all of which made Artesians feel particularly vulnerable to attack should there be a war with the Soviets.

Abo Elementary School was part of a pilot program; The Office of Civil Defense wanted to see if schools could make good public shelters, and they paid a portion of the total cost of the school.  Abo Elementary got a fair amount of media attention at the time of its opening — around 60,000 people toured the school in its first few years and Dan Rather did segment on Abo on the CBS evening news.

Abo Elementary is entirely underground, and its roof served as a playground for the kids. There were three separate stairways where kids entered  the building, each equipped with a 1,800-pound steel blast-door and decontamination showers.

Abo Elementary was designed by architect and civil defense enthusiast, Frank Standhart. He claimed it could withstand a 20 megaton blast and resist radiation. The school included a morgue and stockpiles of medicine, food and bedding for would-be inhabitants.  It also had a generator, a well for drinking water, and a ventilation system.

The nuclear-fallout protections were invisible to the kids that went to school there. Many of them didn’t even know that their school was built to double as a bomb shelter.

Appropriately (and adorably) the kids at Abo decided their mascot would be a gopher.

Teachers said they generally liked the school because the students weren’t distracted by staring out the windows, and the students were proud of their school. But Abo had critics, too, including one Soviet newspaper that said Artesia was “indoctrinating students to the inevitability of war.”

Meanwhile, the rest of the country was similarly engaged in a debate over fallout shelters. Thinking about fallout shelters brought up all kinds of questions like what kind of world would you emerge to after nuclear war? And could a shelter system make our leaders more likely to engage in nuclear war? Time magazine published an article in 1961 called “Gun Thy Neighbor,” in which a man with a shelter in his backyard stated that he would kill any neighbors who tried to enter his shelter after a nuclear attack.

Even Bob Dylan weighed in on the fallout shelter debate:

Bob Dylan – Let me die in my footsteps by perostoppogno

Kenneth D. Rose, Author of One Nation Underground: The Fallout Shelter in American Culture, estimates that about 200,000 underground shelters were built from the beginning of the cold war to about 1965. That’s about one for every 900 people, but in an era when the majority of Americans believed nuclear war was imminent, Rose thinks 200,000 is a small number.

Abo Elementary never had to serve as a fallout shelter, but it served as a school until 1995.  And when they finally closed the school, it wasn’t because they were tired of being underground, it had more to do with the cost of maintaining an underground building.

A new school called Yeso Elementary was built above ground, and just to the west of Abo, but in the spirit of Abo, has very few windows. Yeso and Abo are both geological layers of the earth; Yeso being the layer just above Abo. Abo Elementary was listed in the National Registry of Historic Places in 1999.

Now Abo Elementary is used for district storage. But twice a month it’s also used by Federal Law Enforcement Officers to train for school-shooting scenarios. The school that was once meant to protect children from the dangers of the modern world is still doing so.

Special Thanks to Nancy Dunn at the Artesia Historical Museum, and to KSVP  for having Katie live on air.

Our Squarespace site of the week is from Josh Ellingson. He made this! 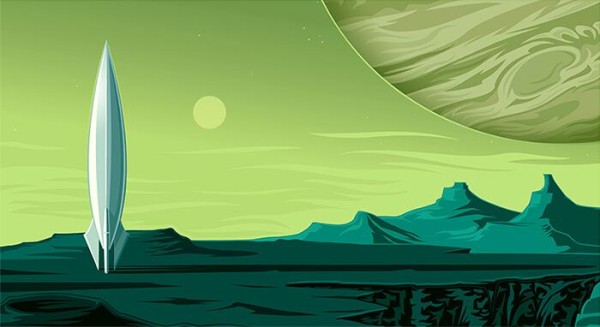