James T. Green went to a lot of loud family gatherings as a kid — big meals filled with gossip, complaints, and bravado. But there was one particular sound from those dinners that he’ll never forget. It came from his Uncle Scooter’s trusty flip-phone, which was always clipped to his belt. Scooter had a lot of girlfriends, and so his phone rang all the time. “It may be rude of me but I wanted to hear my phone — I wanted it to ring!” Scooter says. And over the years his ringtone never changed. It was always the song “Women’s Work” by Maxwell.

This was a time when everyone had ringtones — when the song your phone played really said something about you. These 15 second melodies were disposable, yet highly personal trinkets. And it was all thanks to a man named Vesku-Matti Paananen.

The Father of the Custom Ringtone

In 1997, Vesku was living in Helsinki, Finland.  And one morning, after a long night of partying, Vesku woke up hungover and fragile. His phone would not stop ringing, and he had that awful, stock Nokia ringtone.

The sound was so annoying that eventually, Vesku decided he just couldn’t take it anymore. “I decided that’s now is enough,” says Vesku, “we got to do something with this thing.” If Vesku’s phone was going to ring, it was going to make the sounds he wanted to hear, and what he really wanted to hear was the song “Jump” by Van Halen. “It’s a power song. It would have been so much better to hear,” says Vesku.

It turned out that the Nokia phones that Vesku and his friends were using had an early text messaging function called Smart Messaging, which let Nokia users send messages to each other. Vesku and his friends realized that they could compose ringtones in a program Vesku created called Harmonium — and then use that Smart Messaging platform to transfer bits of a song as code to a cell phone.

Once he got that working, Vesku was able to create a really basic version of Van Halen’s “Jump.” He loaded the ringtone into his phone and was excited to test it out in public. His big moment came on the way to a meeting on a packed rush-hour train. Someone called his phone, and “Jump” screamed from his pocket. Everyone on the train was staring at him, and he loved it. The custom ringtone was born.

Vesku wanted everyone to be able to do the same and choose the ringtone they wanted to hear. He started pitching telephone companies on the idea of an application that would allow people to create, share, and download custom ringtones. A Finnish wireless provider called Radiolinja said yes, and took Vesku’s idea and scaled it up. Vesku’s software allowed anyone with time on their hands to make their own musical ringtone creations, but most people didn’t have time on their hands. This meant they needed a massive library of everyone’s favorite songs in ringtone form. But to build that library they needed ringtone composers.

Mike Levine was one of these ringtone composers. “One thing [was] that would take a lot of my time during the day was to think, ‘How do I boil down a song with a lot of voices down to just one simple melody line?’” Levine worked for a ringtone production company called Zingy while he was studying technology at NYU and found the job listing on Craigslist. And he says that being a ringtone maker was kind of like being a translator. Each tune was its own little puzzle. “You’d have to think of just that melody line and do it in such a way where it would still communicate you know what the song was to folks with when the ringtone went off,” explains Levine

Zingy was one of the largest ringtone producers in the world. In 2004, the company says it sold 2.5 million ringtones a month. These were basic monophonic ringtones which were simple melodies played one note at a time. But phones eventually got smaller and cheaper, and the business model began to change. Phone companies starting giving away phones for very little money with the idea that they would make their profits on the contract and other services like wallpaper backgrounds or ringtones. This created a demand for better, more musically complex ringtones.

This was when polyphonic ringtones began entering the market. Ringtone composers could create four different channels of audio, rather than just the one. They could imitate multiple instruments at the same time. With polyphonic ringtones, composers were able to move beyond code, and they didn’t have to completely reprogram the song for every phone manufacturer. Now they could actually start using keyboards to map out their creations. This was the golden age of the ringtone when composers like Mike Levine were cranking out their greatest works of ringtone art.

In a short period of time, ringtones became a booming business. But using all of these popular songs meant companies Zingy needed to get the rights to them. Stacey Abiraj handled licensing at Zingy, and she said that as soon as a new song dropped, it was a mad scramble to get the license to turn it into a ringtone. “…We need to make sure that we have the ringtone the day the song drops. And so oftentimes our job was feverish really trying, you know, within the space of hours to figure out which publishers and labels owned rights to certain songs,” Abiraj explains. All of these forces: licensing, tech, and business came together to usher in the final, fully evolved form of the ringtone: The Real Tone.

Real Tones were basically just snippets of the song cut down to size. Like Uncle Scooter’s ringtone, it was just that Maxwell song. It was the closest thing to listening to music on our phones in the mid-2000s. And as cool as it was to finally hear music on your phone in high fidelity, for composers like Mike, it was hard not to see the rise of the Real Tone as something of a loss. “Once we got the rights to the actual songs and once the technology got savvy enough, we became much more editors at that point than anything else,” remembers Levine. “We missed getting to actually get into the nitty-gritty and create the audio ourselves.” And that bleepy bloopy ringtone aesthetic was gone forever. Ringtones were just music now.

With millions of cellphone users buying Real Tone pop songs, ringtones became a cash cow. And not just for the phone companies, also for the music industry which was struggling in the early 2000s. With the rise of both legal and illegal file sharing, the revenue in the music industry was decreasing. Selling ringtone versions of their songs was seen as sort of a way to make up for that lost revenue. Real Tones, which were actual snippets of the songs, allowed the music industry to have more control so they were able to charge a higher price and get a bigger cut.

The Real Tone may have helped the music companies, but it ended up being the beginning of the end for the ringtone industry. According to Sumanth Gopinath, professor of music theory, the custom ringtone met its demise for a few reasons. As smartphones improved, people just started using their own mp3s as ringtones. Also, scammers got into the ringtone business and started scaring off the customers. But the biggest reason was that it just became too much. If everyone had their own cellphone with their own little ringtone, public spaces got really noisy. And so everyone just started putting their phones on vibrate,

“There was a kind of social policing that really has also taken place to reduce a sort of public phone communication practices and the ringtones decline is a part of that,” explains Gopinath. Phones became more functional. Texting got better, faster, and more convenient. Our phones became full-on pocket computers and entertainment devices and headphones created personal auditory bubbles for each listener.

This spelled the end for ringtone companies like Zingy, and ringtone makers like Levine. “I’ll be honest by like mid ‘07 it became an almost daily expectation be like we knew you know this ax is going to fall anytime. We just didn’t know when it was going to come and everybody was just thinking we’re all making good money here. Let’s just enjoy it while it lasts,” Levine remembers. By Fall of 2007, the day came when Levine’s CEO announced that the entire content group would be fired. 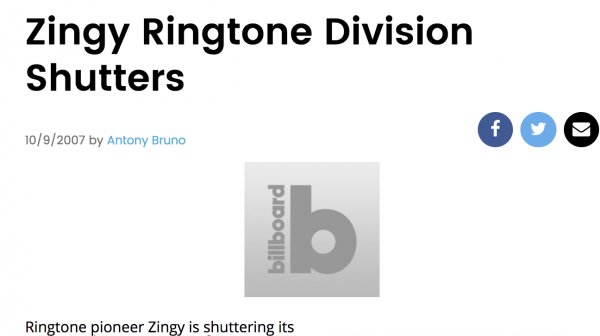 Portal to the World

Over a decade later, our phones are touch screened, mini-computers that never leave our sides. They are our music players, our televisions, our portals to the world. And in a way it all kind of started with Vesku, and his need to have Van Halen on his flip phone. “We proved that there will be there is such thing as a mobile entertainment. There is a business there and it will change the whole world,” he claims.

And don’t forget Uncle Scooter. His ringtone, sixteen years later, is still that Maxwell song. “In my day when you got something, you held onto it because it was hard to come by,” Scooter says, “So when you got something you learn to hold onto it, take care of it and treasure that and I guess it carried over into my adulthood, especially with something that you like. I love this ringtone and I held onto it for dear life and I’ll probably have this ringtone until I die.”

A version of this story first appeared in Pop-Up Magazine

99pi Ringtones for Your Phone

99pi’s own composer Sean Real worked on a series of songs for this episode that you can click here to download and use!

“The Custom Ringtone” by Sean Real.

“Take Your Phone Off Vibrate” by Sean Real.

Real Talk: Behind the Music with 99pi Composer Sean Real & Her New

Asked about the genesis of her new album... [Read More]