Shaped like a small tunnel (with an arched top and flat front, back and bottom), the now-classic metal mailbox with a red flag on the side was designed by United States Post Office employee Roy Joroleman in 1915. Left unpatented, the box has become a universal symbol of postal delivery over the past century. But for years leading up to its creation, the design landscape of mail service looked a lot different.

In 1863, with the creation of Free City Delivery, the US Post Office Department began delivering mail to home addresses. But it would take decades for mail slots and boxes to become standard — at first, delivery persons would knock and wait at front doors. Rural residents, meanwhile, who comprised around 2/3 of the population in the 1890s, still had to go to area post offices to pick up their mail. They paid the same postage as city dwellers, though, and were not happy about it.

A new and experimental Rural Free Delivery service rolled out in 1896, leaving farmers to cobble together mailboxes from whatever they could. Lard cans and feed crates as well as soap, cigar and nail boxes were stuck on posts, looking little like parts of an institutional mail system. By 1901, the Post Office started implementing standards:

Patrons who failed to comply (above, left) were warned that service would be cut off, and advised to buy one of the 14 boxes the Post Office had reviewed and deemed suitable for the task (above, right). Until the Post Office put a stop to the practice (conflicts of interest), some mail carriers even talked up boxes on behalf of manufacturers.

Still, even the more limited offerings had issues — particularly when it came to larger parcels. Eventually, the Post Office Department turned to their own Roy Joroleman to design a better box. “Everyone had an idea as to what to use for a rural mailbox with the result that I was asked to design a box,” he wrote in his journal. Anyone could produce the box and postmasters kept a list handy of the companies that did. 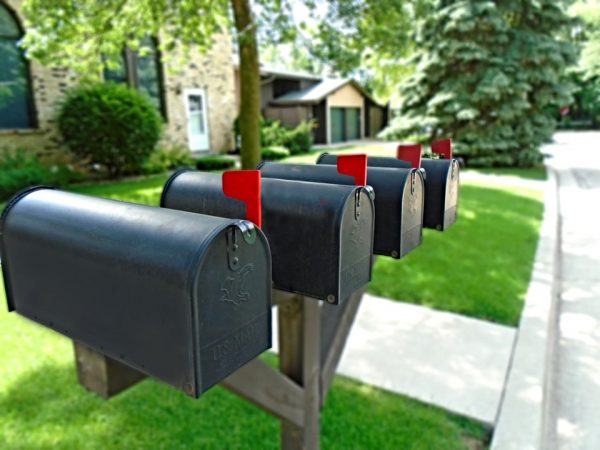 The boxes were constructed from light-gauge painted steel, with an arched top to prevent water and snow from accumulating and to help the structure maintain its shape. The arch also helped with mass-production, reducing the need for precisely bent sheets. A front latch mechanism helped protect mail inside the box. With just two rivets, three axle bolts and four screws and nuts, it was simple, durable and inexpensive. A second, larger version was developed in 1929 for bigger parcels. Free of patent restrictions, the design initially took off in rural areas, then later in suburbs during the post-WWII building boom.

Mail delivery in cities accommodated more variety, including wall-mounted variants, mail slots and clustered boxes. But from 1915 to 1978, any new rural mailboxes were expected to use Joroleman’s design, making these ubiquitous. Rural box designs have branched out a lot since that restriction was lifted, but this partially rounded shape has persisted, remaining iconic even now in the digital age.