The Sears & Roebuck Mail Order Catalog was nearly omnipresent in early 20th century American life. By 1908, one fifth of Americans were subscribers. Anyone anywhere in the country could order a copy for free, look through it, and then have anything their heart desired delivered directly to their doorstep. At its peak, the Sears catalog offered over 100,000 items on 1,400 pages. It weighed four pounds.

Today, those 1,400 pages provide us with a snapshot of American life in the first decade of the 20th century, from sheep-shearing machines and cream separators to telephones and china cabinets. The Sears catalog tells the tale of a world — itemized. And starting in 1908, the company that offered America everything began offering what just might be its most audacious product line ever: houses.

From 1908 to 1940, the Sears Modern Homes Program offered complete mail-order houses to the would-be homeowner — what would come to be called “kit homes.” Customers could select from dozens of different models in Sears Modern Homes Catalog, order blueprints, send in a check, and a few weeks later everything they needed would arrive in a train car, its door secured with a small red wax seal (just like the seal on the back of a letter). 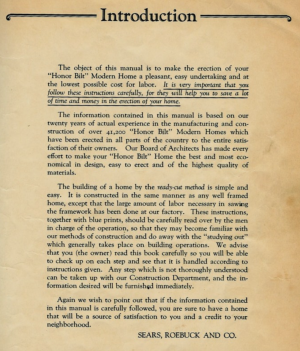 This seal was to be broken on arrival by the new owner, who would open up their boxcar to find over 10,000 pieces of framing lumber, 20,000 cedar shakes and almost everything else needed to build the home — all the doors, even the doorknobs.

The lumber came precut, kind of like a giant Ikea set, along with an instruction booklet. Sears promised that, working without a carpenter and only rudimentary skills, a person could finish their Sears mail order home in less than 90 days. 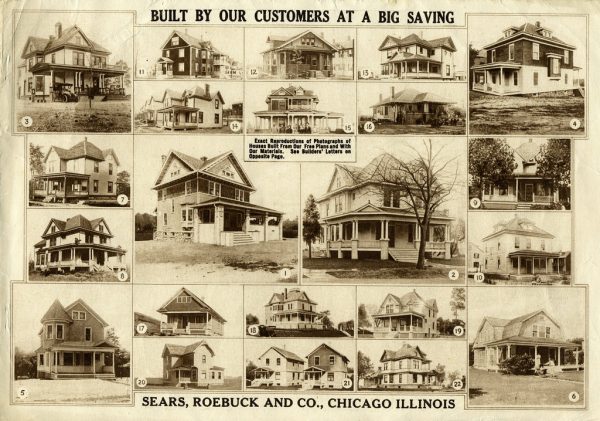 Sears would go on to ship out some 75,000 homes across the country. In so doing, they helped usher out the era of the custom site-built house, replacing it with the promise that homes could be standardized and affordable. Long before the advent of housing developments and the modern suburb it was the Sears kit home that gave Americans their first taste of 20th century domestic life. But it’s also a chapter of housing history that was almost lost.

Sears was not the first company to offer kit homes or a mail order catalog, but it came to dominate the mail-order market in part because its founder, Richard Sears, was that kind of expert that so many people would claim to be over the course of the 20th century but very few actually were: he was a marketing genius. For example, according to lore, he intentionally made the Sears Roebuck catalog a little shorter and narrower than the Montgomery Ward one on the theory that it would naturally get stacked on top. 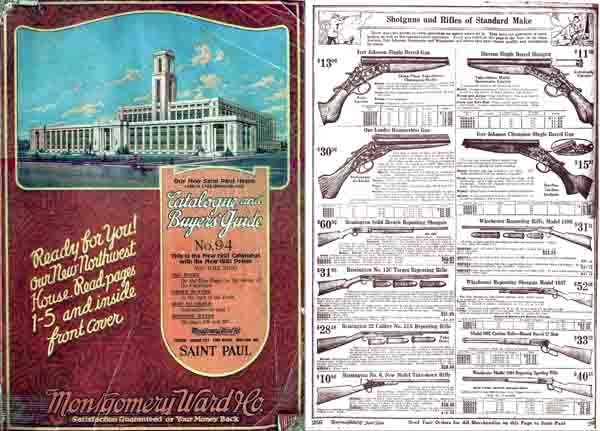 By 1907, Sears and Roebuck was selling the then equivalent of $1.3 billion of merchandise to American families every year. And it’s around this time that Richard Sears saw a way to sell even more. 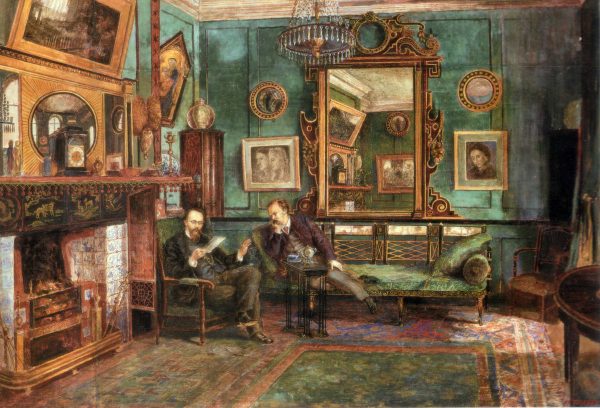 Most American families at the time were still living in multi-generational housing. The reigning paradigm of the middle class was the Victorian home with all of these different little rooms for different family members. Sears looked at this idyllic scene of families living in harmony and saw … a wasted opportunity. Why should newlyweds move into old homes filled with old things when they could move into new homes and fill them with new things from Sears‽ 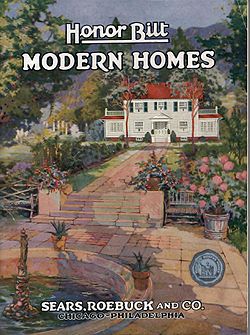 The resulting Sears Modern Home Program was a hit, particularly after the end of World War I, the influx of returning veterans triggered a need for more housing. Sears prefabricated almost all of these homes in giant mills situated across the country.

Located in Cairo Illinois, the largest of these mills covered nearly 40 acres, and the sheer variety of homes it shipped out was staggering.

Their first Modern Homes catalog already had over 40 models to choose from, but Sears would go on to offer 447 different designs. 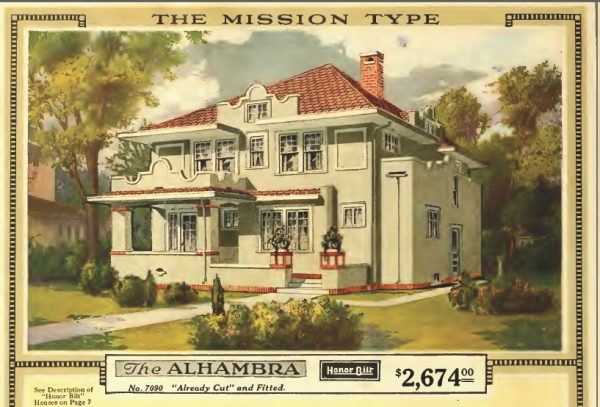 Every house in the catalog had a name befitting its architectural aspirations. So if you always dreamed of living in a California mission style home, but couldn’t actually move to California, you might consider purchasing Sears’ Alhambra model. Other styles included the Vallonia, the Martha Washington and the Crescent. They ranged from modest and cozy cabins to expansive mansions. Sears even offered a six-classroom schoolhouse, complete with an auditorium and library. 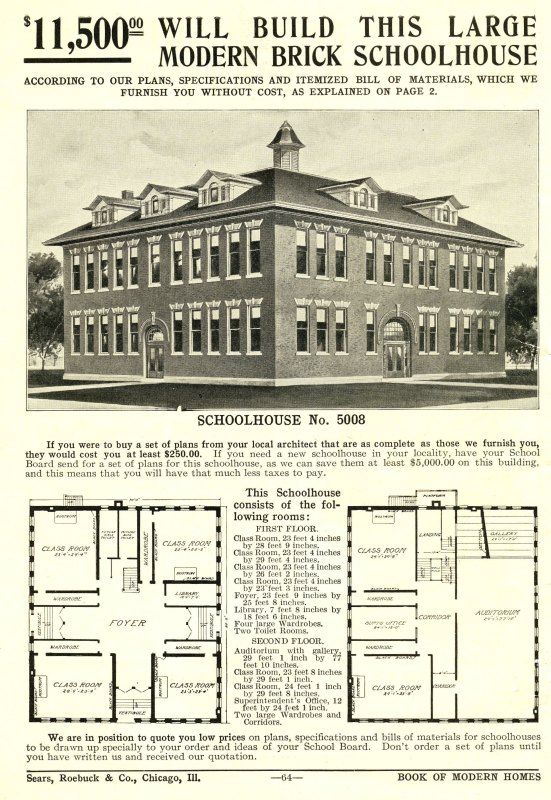 Of course, these were just empty houses when they were built, ready to be filled with stuff — ideally, stuff from Sears. The company could sell you everything you needed: the house, the furniture, and all the things to put on the furniture — a whole new life, all from Sears. 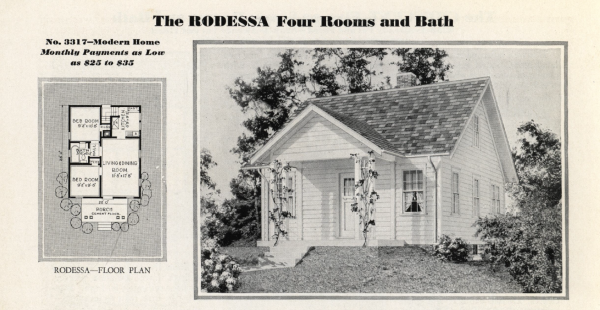 Sears offered the promise of convenience at every level. It even had an ad in the front of the catalog showing two Rodessa models — one of Sears most popular houses — being built side by side. One was built from scratch, essentially, using ordinary building materials and uncut “stick” lumber. The other utilized precut lumber. The message was clear: it would be much easier to build from Sears’ precut parts.

For many families, these were their first homes with things like insulation and central heating. In some neighborhoods, a Sears kit home might be the only house on a block with electricity. 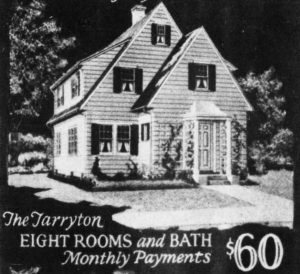 Then, in 1911, Sears began offering mortgages to their customers. Like everything else, they made these easy — maybe too easy. The Sears home mortgage program started out as one of their keys to success. In lowering the barrier to entry, it had allowed Sears to sell far more kit homes far faster than any of its competitors. But when the Great Depression hit, things got ugly fast. The company ended up foreclosing on tens of thousands of its very own customers. It was a public relations disaster.

After years of declining sales, Sears would finally close its Modern Homes department in 1940. A few other kit home manufactures — ones that hadn’t sold mortgages — survived, but the Sears kit home boom was over. Then came World War II, and with it, the next modern housing boom, featuring the rise of the suburbs and the prefab home — the kinds of homes we know today.

Meanwhile, most existing Sears homes ended up being sold to new owners who didn’t know what they’d bought, or didn’t care to know. Despite the high quality of the materials, over the decades, as the company became associated with convenience over and above quality, no one wanted to admit that they lived in a home that came from the Sears catalog. It was embarrassing. So a lot of them ended up being renovated beyond recognition. Many were torn down. Others were simply abandoned. And the records for those that remained were destroyed, making it hard to locate Sears homes today.

A little over twenty years ago, on a cold winter day in Elgin, Illinois (a bit outside of Chicago), Rebecca Hunter picked up an old Sears catalog and took it on a walk around the neighborhood, wondering if she might find a real-life home matching the house designs in the book. She wasn’t an architecture expert, or a Sears expert. She was just curious. 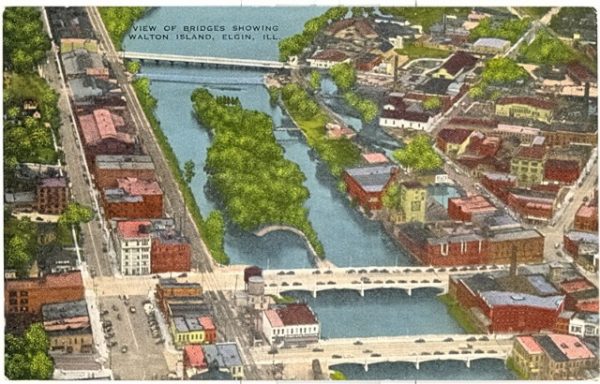 Elgin wasn’t known for its Sears homes — when Hunter moved into the area, it wasn’t really on her radar, or anyone else’s. When she went out on her trek, she recalls she “wasn’t expecting to find any.” It was just for fun, she says, but, “I had a goal. I had a mission and I forgot about the cold.” Yet within a matter of minutes, she spotted her first Sears home: a craftsman-style Avalon that matched her catalog. As she took more and more walks, she found more and more examples.

Hunter started taking notes about styles and locations, but she also wanted to verify her finds. So she began reaching out to residents, sending out mailers asking owners to inspect their homes for special beams bearing part numbers from Sears. Some also found shipping labels on the backs of baseboards, or original Sears blueprints. So far, she and her fellow kit house hunters have found over 200 in Elgin.

Remarkably, too, most of the Sears homes Hunter found looked like they were straight out of the catalog. They had barely been altered since the 1920s. She was able to find so many not because Elgin had the most Sears homes but because the homes could still be recognized, thanks to a perfect storm of historical conditions.

When the Elgin Watch Factory, which had employed a quarter of the town, closed in 1964, Elgin entered a localized recession, sparing it from the renovation craze of the 1960s and 70s. Instead, Elgin’s Sears homes simply sat there through the decades, largely untouched. The closing of the watch factory froze the town in time.

Hunter’s study of the Elgin homes, along with the work of other researchers, would help to launch fresh interest in historic kit homes, not just there but also around the country. Today, a crew of kit home hunters has self-styled specialists who organize databases, search Google maps, and photograph historic homes. Mostly, though, they hunt for houses the old fashioned way, by meeting up in groups of two and three and four and cruising slowly down the streets of obscure midwest towns, in a car, together.

These and other house hunters have helped identify nearly 50,000 kit homes from Sears and other companies. So the next time a ragtag team of researchers armed with cameras, laptops and an old Sears catalog knocks on your door asks if they can take a quick tour or your basement, don’t be frightened. They’re there to help. And who knows? You might even be standing in an as yet undiscovered model.

Previous Episode: The First Straw
Next Episode: Billboard Boys: The Greatest Radio Contest of All Time